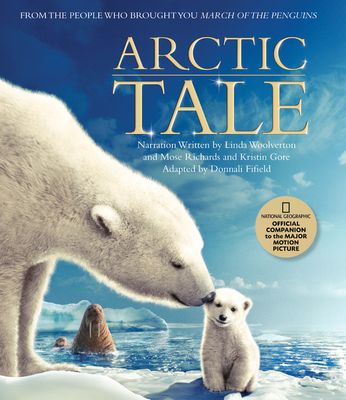 Arctic Tale accompanies a new Paramount Vantage motion picture from the producers of March of the Penguins, the 2005 Academy Award winner and highest-grossing natural history film of all time. The film, narrated by Queen Latifah, follows the dual drama of Seela and Nanu, a walrus calf and polar bear cub, as they embark on their astonishing journey from infancy to maturity amidst the stark beauty of the Arctic landscape. Protected by mothers who will stop at nothing to ensure their safe passage to adulthood, both cubs romp in their cold playground as ever-present threats of starvation, predators, and a harsh homeland are overcome in an unrelenting life-and-death struggle to survive.

Each year in the unforgiving, frozen wilderness the two giants of the North Pole—the walrus and the polar bear–begin the cycle anew, of birth and death; of love and life; and of self-sacrifice and great danger.

Adapted and deeply expanded from a sweeping screenplay, Arctic Tale features 150 stunning, full-color National Geographic photographs and stirring text that tell the heartwarming tale of motherhood, community, the circle of life, and the rapidly changing environment that is home to these splendid animals. Both the book and film call awareness to the global warming crisis through emotional connection to the characters.

A foreword by directors Adam Ravetch and Sarah Robertson and a special "Making the Film" chapter at the end of the book reveal amazing behind-the-scenes battles against cold, ice, and walrus mothers, and add insight and understanding to the riveting story.

DONNALI FIFIELD translated and adapted the companion book for March of the Penguins. The author of several books, she is an e-publisher based in San Francisco. A longtime freelance editor, she has also edited numerous books, including fiction, and has worked for such publications as Forbes ASAP, Mother Jones, and San Francisco Magazine.
ADAM RAVETCH is one of a handful of filmmakers to shoot beneath the Arctic ice cap. Ravetch's five arctic film have collected awards from around the globe including an Emmy nomination. Born and educated in California, Ravetch received his BSc in zoology from San Diego State University. When not in the Arctic, Ravetch makes his home on Vancouver Island in British Columbia with his wife, Sarah Robertson and three children and his boat.
SARAH ROBERTSON is a documentary writer and filmmaker who specializes in telling stories about unusual places above and below the northern polar ice cap. Sarah and her husband, Adam, have collaboratively co-produced, filmed and written five more award winning Arctic documentaries. Sarah currently lives on Vancouver Island, British Columbia with her husband, three children and their boat.
or
Not Currently Available for Direct Purchase
Copyright © 2020 American Booksellers Association