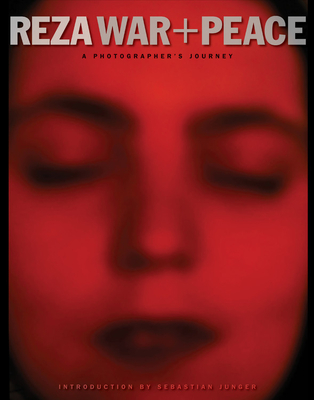 With the Middle East and Asia as his far-ranging home territory, Reza has chronicled 30 years of turmoil, hope, and splendor for a host of international publications including Newsweek, Time, Geo, and National Geographic magazines. Now, he displays some of his most dramatic works in Reza War and Peace–a powerful and moving photo collection that illuminates current events and recent history in places of conflict we see represented in the news every day. These remarkable pictures convey torment and upheaval, but also the art, culture, and traditions of Iraq, Iran, Afghanistan, and other areas–as well as the photographer’s understanding of humanity and deep commitment to justice. Reza trains his lens not just on war and conflict, but also on friendship and loyalty, family life and love. The book follows Reza’s photographic career and is narrated in his own words, focusing our attention on the costs of war and the human condition. Sebastian Junger contributes an introduction, offering intimate insight into what it's like to work with his longtime friend and collaborator.

Despite the challenging subject matter, Reza’s message is not despairing, but ultimately hopeful. For readers interested in world history, current events, and the human experience, this photographic tour de force is a must.

Reza is an Explorer-in-Residence at the National Geographic Society. He is a renowned international photojournalist, who has captured the world in photographs for many leading publications and in more than 15 books. He has devoted much of his life to documenting conflicts and to humanitarian efforts. In Afghanistan he established Aina, a local NGO aimed at training journalists and establishing newspapers and other media outlets.
or
Not Currently Available for Direct Purchase
Copyright © 2020 American Booksellers Association