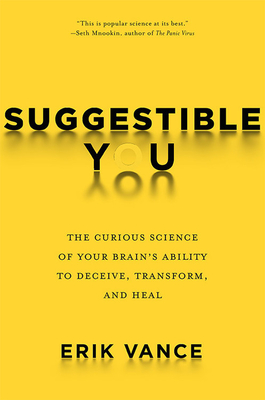 The Curious Science of Your Brain's Ability to Deceive, Transform, and Heal


Praise For Suggestible You: The Curious Science of Your Brain's Ability to Deceive, Transform, and Heal…

"An eye-opening exploration of the intersection between philosophy and science and a fascinating peek into our innermost selves." —Kirkus Reviews

"Science journalist Vance takes an inspired journey into the profound and often unnoticed powers of our brains." —Publishers Weekly

ERIK VANCE is an award-winning science writer based in California and Mexico City. Raised as a Christian Scientist, he graduated with honors from the Christian Science school, Principia College in 1999 with a degree in biology. After working as a scientist on research projects dealing with dolphin intelligence and coastal ecology, he became an educator and then an environmental consultant. In 2005, he attended UC Santa Cruz’s famed science communication program and discovered a passion for journalism. There he learned that only through compelling characters can stories touch and inspire us. Since then, he has built his career around science-based profiles of inspiring, dedicated, or controversial figures in society. His work has appeared in Harper’s Magazine, The New York Times, The Utne Reader, Scientific American, and National Geographic. He is also a contributing editor at Discover magazine.
Loading...
or
Not Currently Available for Direct Purchase