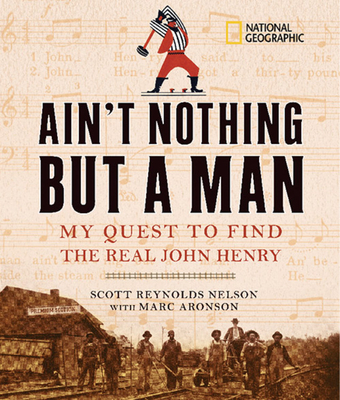 Ain't Nothing but a Man (Library Binding)

My Quest to Find the Real John Henry

Who was the real John Henry? The story of this legendary African-American figure has come down to us in so many songs, stories, and plays, that the facts are often lost. Historian Scott Nelson brings John Henry alive for young readers in his personal quest for the true story of the man behind the myth. Nelson presents the famous folk song as a mystery to be unraveled, identifying the embedded clues within the lyrics, which he examines to uncover many surprising truths. He investigates the legend and reveals the real John Henry in this beautifully illustrated book.

Nelson’s narrative is multilayered, interweaving the story of the building of the railroads, the period of Reconstruction, folk tales, American mythology, and an exploration of the tradition of work songs and their evolution into blues and rock and roll. This is also the story of the author’s search for the flesh-and-blood man who became an American folk hero; Nelson gives a first-person account of how the historian works, showing history as a process of discovery. Readers rediscover an African-American folk hero. We meet John Henry, the man who worked for the railroad, driving steel spikes. When the railroad threatens to replace workers with a steam-powered hammer, John Henry bets that he can drive the beams into the ground faster than the machine. He wins the contest, but dies in the effort.

Nelson’s vibrant text, combined with archival images, brings a new perspective and focus to the life and times of this American legend.

Author and historian Scott Reynolds Nelson is the Legum Professor of History at The College of William and Mary in Virginia. His previous book on John Henry, Steel Drivin’ Man, was awarded the Organization of American Historians Merle Curti Prize and an Anisfield-Wolf award. He lives in Williamsburg, Virginia.
or
Not Currently Available for Direct Purchase
Copyright © 2020 American Booksellers Association