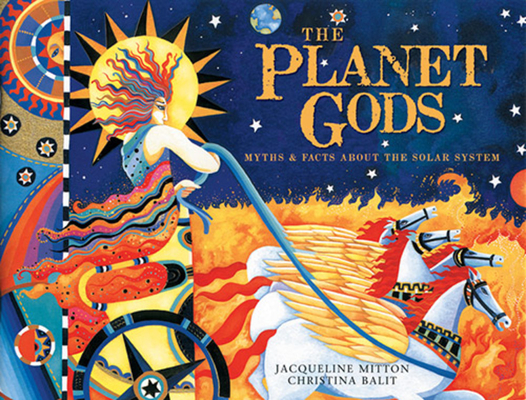 Myths and Facts About the Solar System

With the addition of Ceres and Eris to our solar system, every library, school, and space-gazing, mythology-loving kid needs an updated look at the planets and the gods they represent. The Planet Gods is that volume: a new, reliable guide to the exciting recent developments in the world of astronomy from the experts here on planet Earth.Distinguished astronomer and writer Dr. Jacqueline Mitton takes us on a fascinating tour of the planets of our Solar System, taking into account all the latest reclassifications of the heavens. A lyrical, poetic text explores the features of the planets and compares them to the gods of old who are their namesakes. Though many of the planets were named long before we had good scientific information about them, Mitton draws readers attention to some amazing coincidences. The veiled goddess Venus lends her name to a cloud-shrouded planet. The blue, stormy planet Neptune is named for the god of the sea.The Planet Gods brings together for the first time the myths and truths of space science. Christina Balit’s sparkling magical illustrations, highlighted with metallic ink, make this a fantastic gift book, which will enthrall children of all ages.

Dr. Jacqueline Mitton holds an M.A. in physics from the University of Oxford and a Ph.D. in astrophysics from the University of Cambridge. She works as a Public Relations Officer for the Royal Astronomical Society in England. She is the author of several books for children including Zoo in the Sky: A Book of Animal Constellations. Asteroid 4027 was named Mitton for Dr. Mitton and her husband, astronomer Simon Mitton. She lives in England.
Loading...
or
Not Currently Available for Direct Purchase