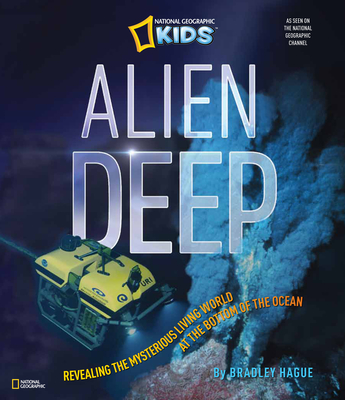 Revealing the Mysterious Living World at the Bottom of the Ocean

Appealing to children over age ten, this engaging reference book depicts adventurous and thrilling elements in oceanographic fieldwork. In conjunction with a National Geographic television show, this book will reach a huge audience of marine lovers, as well as children interested in science and exploration.

Alien Deep outshines the competition by following a recent, specific deepwater exploration that illuminates new knowledge about our oceans. Following alongside a current expedition, Alien Deep will enable children to observe the processes involved in marine exploration. As scientists delve into the mysterious depths of the ocean, children will be able to witness the excitement of scientific exploration and discovery through enriching text and stunning photography. By describing a recent exploration, children will be able to read and see the new methods and technology that oceanographers use to conduct research.

BRADLEY HAGUE has worked with National Geographic for six years, researching and developing television series and specials such as Alien Deep, The Human Family Tree, and Explorer: The Moment of Death. His work has also appeared on the Discovery Channel, BBC News, and in the American Red Cross coverage of Hurricane Katrina. He lives in the District of Columbia.

Praise For Alien Deep: Revealing the Mysterious Living World at the Bottom of the Ocean…