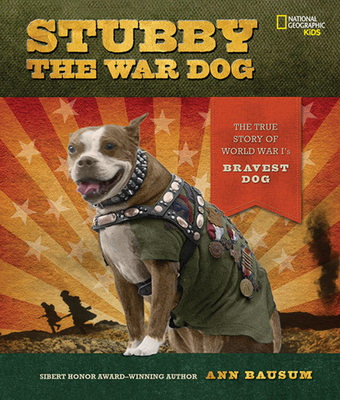 Move over, Rin Tin Tin. Here comes Sgt. Stubby! That German shepherd star of the silver screen may have been born behind enemy lines during World War I, but Stubby, the stump-tailed  terrier, worked behind enemy lines, and gained military honors along the way. Private Robert Conroy casually adopted the orphan pup while attending basic training on the campus of Yale University in 1917. The Connecticut volunteer never imagined that his stray dog would become a war hero. He just liked the little guy. When Conroy''s unit shipped out for France, he smuggled his new friend aboard. By the time Stubby encountered Conroy''s commanding officer, the dog had perfected his right-paw salute. Charmed, the CO awarded Stubby mascot status and sent him along with Conroy''s unit to the Western Front. Stubby''s brave deeds earned him a place in history and in the Smithsonian Institution where his stuffed body can still be seen. Almost 100 years later, Stubby''s great deeds and brave heart make him an animal hero to fall in love with and treasure all over again.

"Through the story of this scrappy canine soldier, Bausum supplies an appealing entry point into the study of WWI." --Publishers Weekly

"Well-written, impeccably researched, and illustrated with dozens of archival photographs and ephemera, this book is a first choice for teachers and parents." --Asheville Citizen-Times

ANN BAUSUM writes about U.S. history for young people, and she has published eight titles with National Geographic Children''s Books including, most recently, Marching to the Mountaintop (2012) and Unraveling Freedom (2010). Ann''s books consistently earn prominent national recognition.Denied, Detained, Deported (2009) was named the 2010 Carter G. Woodson Book Award winner at the secondary school level from the National Council for the Social Studies. Muckrakers (2007) earned the Golden Kite Award as best nonfiction book of the year from the Society of Children''s Book Writers and Illustrators. Freedom Riders (2006) gained Sibert Honor designation from the American Library Association and With Courage and Cloth (2004) received the Jane Addams Children''s Book Award as the year''s best book on social justice issues for older readers. In addition, Ann has written about the nation''s chief executives and their spouses -- Our Country''s Presidents (2013, 4th edition) and Our Country''s First Ladies (2007) -- as well as the intrepid explorer Roy Chapman Andrews (Dragon Bones and Dinosaur Eggs, 2000).
Loading...
or
Not Currently Available for Direct Purchase