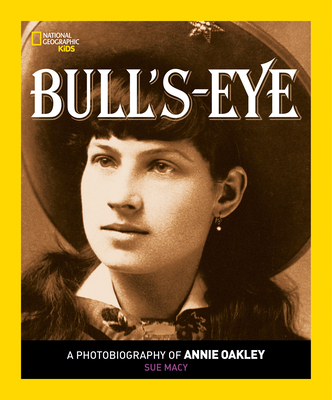 National Geographic's award-winning photobiography of Annie Oakley is the stirring story of an enduring American heroine that has won widespread acclaim and was named a School Library Journal Best Book of the Year. Her amazing life comes sharply into focus in a compelling narrative, period photography, and her own words. Two historical maps and a chronology ground the legend in time and place. Readers ride through a life filled with adventure. A dynamic woman of American lore, Annie grows up in the backwoods of Ohio, hunting game to feed her family. Discovered by Buffalo Bill Cody's Wild West Show, she wows crowds with target shooting and daring horse riding. Annie's hardships are examined, too, as is her inspirational status as a role model for women. Awards include:• American Library Association Notable Book• Cooperative Children's Book Center Choice• NCSS/CBC Notable Social Studies Trade Book for Children• Placement on the Texas Bluebonnet Award Master List

Sue Macy is the author of Bull’s-Eye: A Photobiography of Annie Oakley, Winning Ways: A Photohistory of American Women in Sports, and A Whole New Ball Game: The Story of the All-American Girls Professional Baseball League, among many other titles. She has received numerous awards and starred reviews for her work. Winning Ways and A Whole New Ball Game were both named ALA Best Books for Young Adults and NCSS-CBC Notable Social Studies Trade Books for Young People.
Loading...
or support indie stores by buying on
(This book is on backorder)