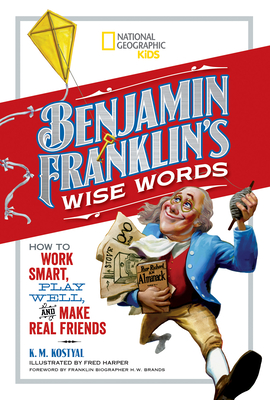 How to Work Smart, Play Well, and Make Real Friends

Discover history through the eyes of one of the smartest, funniest, and coolest figures from America's past. This book presents 50 of Benjamin Franklin's famous "wise words" from Poor Richard's Almanack, his personal letters, and other writings, with sage advice on everything from good citizenship and manners to friendship and being happy. Sayings are paired with hilarious illustrations and witty translations for modern audiences. It's a great go-to for inspirational and innovative ways to practice mindfulness, industriousness, and self-improvement.

Award-winning author K. M. KOSTYAL has written nearly 20 books on history, music, world cultures, and wars. Her most recent works for National Geographic include Founding Fathers: The Fight for Freedom and the Birth of American Liberty; George Washington's Rules to Live By; Christmas in Williamsburg; Lost Boy, Lost Girl: Escaping Civil War in Sudan; and Great Migrations, the companion book to the National Geographic Channel's acclaimed series on animal migration.

"[Franklin's] foibles are described along with his achievements, painting a nuanced look at both his persona and the formative era in which he lived. Illustrations by Harper, who cut his artistic chops drawing comics, shine as contextual support for the more abstract ideas. By casting off the traditional chronological form of typical biographies, Kostyal creates an account of Franklin’s life and his philosophy that will invite young readers to make connections to their own lives and to the modern world." -- Booklist

"Harper works in an exaggerated cartoon style that balances the biographical and aspirational aspects of the book with big boses of physical comedy." -- Publisher's Weekly