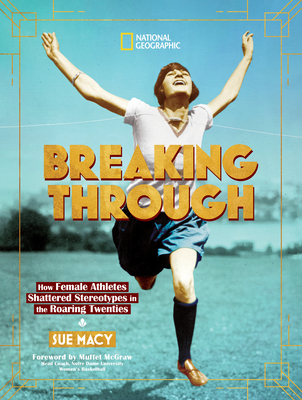 How Female Athletes Shattered Stereotypes in the Roaring Twenties


Praise For Breaking Through: How Female Athletes Shattered Stereotypes in the Roaring Twenties…

"[Breaking Through] gathers a good deal of pertinent information and presents it chronologically in two-year chapters that end with intriguing roundups of other contemporary events and concerns. Sidebars offer period quotes from sportswriters. Illustrated with well-chosen vintage photos, this colorful book offers a lively introduction to women’s athletics during the 1920s and follows it up with an engaging epilogue titled “Approaching Equality” and a detailed time line, “Defining Moments in Women’s Sports.” The author of Wheels of Change (2011) and Motor Girls (2017), Macy writes perceptively about the history of American women’s sports." -- Booklist Starred Review

A feminist look at how events of the 1920s informed the role of female athletes through the next century of American sports. Art deco page designs, colorized archival photos, and reprinted news articles bring readers into the Roaring '20s, illustrating a time of radical change in women's liberation through the lens of sports… A recommended introduction to an often overlooked aspect of feminist history.” -- Kirkus Reviews

"This book is ….visually appealing and includes high quality, well-selected photographs.... VERDICT: A fascinating and credible overview of women in American sports in the 1920s. A win for most public and school library collections." -- School Library Journal


"The content is direct and precise, its perspectives treated with nuance and care. When possible, the book relies on primary sources, including newspaper articles and quotes from athletes themselves... A satisfying ending shows that the initiatives of the 1920s reverberated through the following decades, laying the groundwork for continued pushes toward equality. Breaking Through is a stirring saga that uses excellent visual storytelling to capture a unique time in women’s athletic history." -- Foreward

Sue Macy is the author of Bull’s-Eye: A Photobiography of Annie Oakley, Winning Ways: A Photohistory of American Women in Sports, and A Whole New Ball Game: The Story of the All-American Girls Professional Baseball League, among many other titles. She has received numerous awards and starred reviews for her work. Winning Ways and A Whole New Ball Game were both named ALA Best Books for Young Adults and NCSS-CBC Notable Social Studies Trade Books for Young People.
Loading...
or support indie stores by buying on