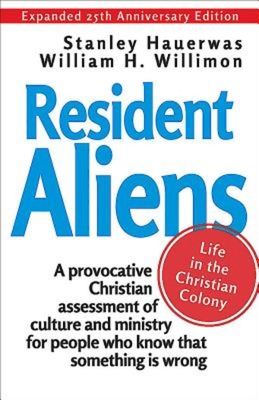 Life in the Christian Colony

Only when the Church enacts its scandalous Jesus-centered tradition will it truly be the body of Christ and transform the world. Twenty-five years after its first appearance, Resident Aliens remains a prophetic vision of how the Church can regain its vitality, battle its malaise, reclaim its capacity to nourish souls, and stand firmly against the illusions, pretensions, and eroding values of today's world. Resident Aliens discusses the nature of the church and its relationship to surrounding culture. It argues that churches should focus on developing Christian life and community rather than attempting to reform secular culture. Stanley Hauerwas and William H. Willimon reject the idea that America is a Christian nation; instead, Christians should see themselves as resident aliens in a foreign land. According to Hauerwas and Willimon, the role of Christians is not to transform government but to live lives that model the love of Christ. Rather than try to convince others to change their ethics, Christians should model a new set of ethics that are grounded in the life, death, and resurrection of Christ.

Stanley Hauerwas (Author) Stanley Hauerwas is the Gilbert T. Rowe Professor Emeritus of Divinity and Law at the Divinity School at Duke University in Durham, North Carolina. He has written a voluminous number of articles, authored and edited many books, and has been the subject of other theologians' writing and interest. He has been a board member of the Society of Christian Ethics, Associate Editor of a number of Christian journals and periodicals, and a frequent lecturer at campuses across the country. William H. Willimon (Author) Feeling most at home behind a pulpit, Will Willimon's deepest calling is to be a preacher and truth-teller of Jesus Christ. He is Professor of the Practice of Christian Ministry at Duke University Divinity School and retired Bishop of the North Alabama Conference of The United Methodist Church, after serving for 20 years as faculty member and Dean of the Chapel at Duke University. He lives in Durham, North Carolina. Will Willimon has published many books, including his preaching subscription service on MinistryMatters.com, Pulpit Resource, and Fear of the Other: No Fear in Love, both published by Abingdon Press.
Loading...
or support indie stores by buying on