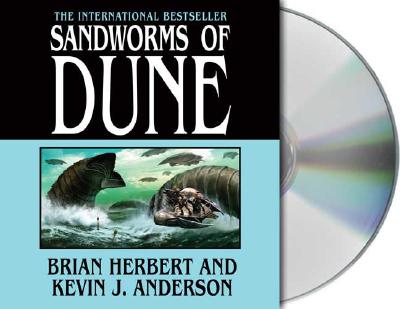 At the end of Frank Herbert's final novel, "Chapterhouse: Dune, " a ship carrying a crew of refugees escapes into the uncharted galaxy, fleeing from a terrifying, mysterious Enemy. The fugitives used genetic technology to revive key figures from Dune's past--including Paul Muad'Dib and Lady Jessica--to use their special talents to meet the challenges thrown at them.
Based directly on Frank Herbert's final outline, which lay hidden in two safe-deposit boxes for a decade, "Sandworms of Dune "will answer the urgent questions Dune fans have been debating for two decades: the origin of the Honored Matres, the tantalizing future of the planet Arrakis, the final revelation of the Kwisatz Haderach, and the resolution to the war between Man and Machine. This breathtaking new novel in Frank Herbert's Dune series has enough surprises and plot twists to please even the most demanding reader.

Praise For Sandworms of Dune…

"[A] sizzling update."--Publishers Weekly on Hunters of Dune

"Dune addicts will happily devour Herbert and Anderson's spicy conclusion to their second prequel trilogy."--Publishers Weekly on Dune: The Battle of Corrin

"The kind of intricate plotting and philosophical musings that would make the elder Herbert proud."--Publishers Weekly (starred review) on Dune: The Butlerian Jihad

Brian Herbert, the son of Frank Herbert, is a multiple "New York Times "bestselling author in his own right. He is the winner of several literary honors and has been nominated for the Nebula award. His critically acclaimed science fiction novels include "Sidney's Comet, Sudanna Sudanna, The Race for God, " and "Man of Two Worlds" (written with Frank Herbert). Recently, he completed "Dreamer of Dune," a comprehensive biography of his illustrious father.

Kevin J. Anderson has written twenty-nine national bestsellers and has been nominated for the Nebula Award, the Bram Stoker Award, and the SFX Reader's Choice Award. His critically acclaimed original novels include "Captain Nemo, Hopscotch, " and "Hidden Empire." He also set the Guiness world record for "Largest Single-Author Book Signing." Scott Brick has read a number of titles in Frank Herbert's bestselling "Dune" series, and he won the 2003 Science Fiction Audie Award for "Dune: The Butlerian Jihad." Brick has narrated for many popular authors, including Michael Pollan, Joseph Finder, Tom Clancy, and Ayn Rand. He has also won over 40 "AudioFile" Earphones Awards and the "AudioFile" award for Best Voice in Mystery and Suspense 2011. In 2007, Brick was named "Publishers Weekly"'s Narrator of the Year.
Loading...
or
Not Currently Available for Direct Purchase