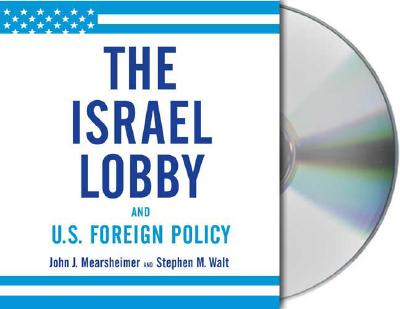 The Israel Lobby," by John J. Mearsheimer and Stephen M. Walt, was one of the most controversial articles in recent memory. Originally published in the London Review of Books in March 2006, it provoked both howls of outrage and cheers of gratitude for challenging what had been a taboo issue in America: the impact of the Israel lobby on U.S. foreign policy.

Now in a work of major importance, Mearsheimer and Walt deepen and expand their argument and confront recent developments in Lebanon and Iran. They describe the remarkable level of material and diplomatic support that the United States provides to Israel and argue that this support cannot be fully explained on either strategic or moral grounds. This exceptional relationship, they claim, is due largely to the political influence of a loose coalition of individuals and organizations that actively work to shape U.S. foreign policy in a pro-Israel direction. Mearsheimer and Walt provocatively contend that the lobby has a far-reaching impact on America's posture throughout the Middle East--in Iraq, Iran, Lebanon, and toward the Israeli-Palestinian conflict--and the policies it has encouraged are in neither America's national interest nor Israel's long-term interest. The lobby's influence also affects America's relationship with important allies and increases dangers that all states face from global jihadist terror.

John J. Mearsheimer is the R. Wendell Harrison Distinguished Service Professor of Political Science and the co-director of the Program on International Security Policy at the University of Chicago. He has published several books, including "The Tragedy of Great Power Politics."

Stephen M. Walt is the Robert and Renee Belfer Professor of International Affairs at the John F. Kennedy School of Government at Harvard University and has been academic dean of the Kennedy School from 2002 to 2006. He is the author of Taming American Power: The Global Response to U.S. Primacy, among other books.
Loading...
or
Not Currently Available for Direct Purchase