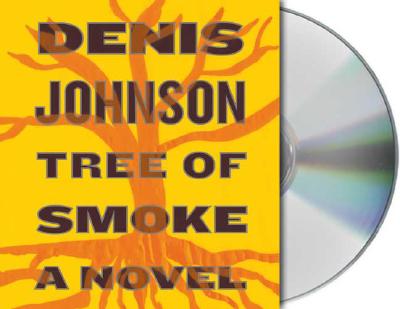 By Denis Johnson, Will Patton (Read by)

This is the story of Skip Sands—spy-in-training, engaged in Psychological Operations against the Vietcong—and the disasters that befall him thanks to his famous uncle, a war hero known in intelligence circles simply as the Colonel. This is also the story of the Houston brothers, Bill and James, young men who drift out of the Arizona desert into a war in which the line between disinformation and delusion has blurred away. In its vision of human folly, and its gritty, sympathetic portraits of men and women desperate for an end to their loneliness, whether in sex or death or by the grace of God, this is a story like nothing in our literature. Tree of Smoke is Denis Johnson’s first full-length novel in nine years, and his most gripping, beautiful, and powerful work to date.

Denis Johnson is the author of five novels, a collection of poetry, and one book of reportage. He is the recipient of a Lannan Fellowship and a Whiting Writer's Award, among many other honors for his work. He lives in Northern Idaho.

Praise For Tree of Smoke…

"This is the very talented Will Paton’s greatest performance as a reader so far.  His range of voices and evocation of character—the hopeful, the innocent, the cynical, the despairing and the mad—bring the tale to even more terrible and blistered life than the book itself, making it a 23-hour excursion into mesmerizing darkness.”--The Washington Post

“Will Patton’s reading of “Tree of Smoke” is superb...The experience overall is one of hallucinatory horror, laugh-out-loud outrage, of sadness at the tremendous waste of lives, money and the national pride that went into Vietnam and did not return.”--Sarasota Herald-Tribune

"Easily the best audiobook I listened to in 2007, "Tree of Smoke" has been called a Vietnam War book, but its reach is much deeper...Johnson has written a powerful document, and Patton matches the depth and breadth of the novel with a performance that captures the nuance of the language..."--Times Union

“American actor Will Patton provides an excellent fully-voiced reading…it fits the story like a glove. He will keep listeners involved.” – SoundLibrary.comPraise for Denis Johnson:
“Once Johnson gets his hooks into you—it takes about two sentences—it’s...pretty much impossible to stop reading.”   —The New York Times Book Review