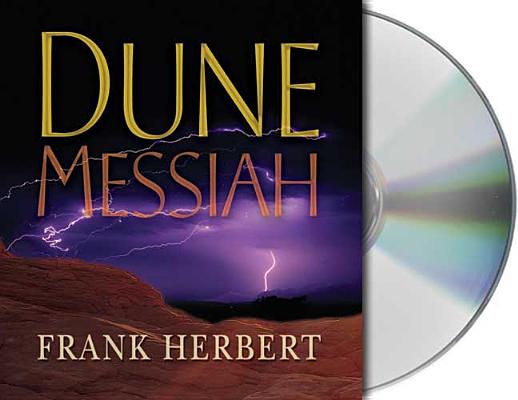 Book Two in the Dune Chronicles

The bestselling science fiction series of all time continues! Frank Herbert's second installment explores new developments on the desert planet Arrakis, with its intricate social order and its strange threatening environment. Dune Messiah picks up the story of the man known as Maud'dib, heir to a power unimaginable, bringing to fruition an ambition of unparalleled scale: the centuries-old scheme to create a superbeing who reigns not in the heavens but among men. But the question is: Do all paths of glory lead to the grave?


Praise For Dune Messiah: Book Two in the Dune Chronicles…

“Unique...I know nothing comparable to it except Lord of the Rings.” —Arthur C. Clarke on Dune

“A portrayal of an alien society more complete and deeply detailed than any other author in the field has managed...a story absorbing equally for its action and philosophical vistas...An astonishing science fiction phenomenon.” —The Washington Post on Dune

Frank Herbert (1920-1986) created the most beloved novel in the annals of science fiction, Dune.  He was a man of many facets, of countless passageways that ran through an intricate mind.  His magnum opus is a reflection of this, a classic work that stands as one of the most complex, multi-layered novels ever written in any genre.  Today the novel is more popular than ever, with new readers continually discovering it and telling their friends to pick up a copy.  It has been translated into dozens of languages and has sold almost 20 million copies.

As a child growing up in Washington State, Frank Herbert was curious about everything. He carried around a Boy Scout pack with books in it, and he was always reading.  He loved Rover Boys adventures, as well as the stories of H.G. Wells, Jules Verne, and the science fiction of Edgar Rice Burroughs.  On his eighth birthday, Frank stood on top of the breakfast table at his family home and announced, "I wanna be a author."  His maternal grandfather, John McCarthy, said of the boy, "It's frightening. A kid that small shouldn't be so smart." Young Frank was not unlike Alia in Dune, a person having adult comprehension in a child's body.  In grade school he was the acknowledged authority on everything.  If his classmates wanted to know the answer to something, such as about sexual functions or how to make a carbide cannon, they would invariably say, "Let's ask Herbert. He'll know."

His curiosity and independent spirit got him into trouble more than once when he was growing up, and caused him difficulties as an adult as well.  He did not graduate from college because he refused to take the required courses for a major; he only wanted to study what interested him.  For years he had a hard time making a living, bouncing from job to job and from town to town. He was so independent that he refused to write for a particular market; he wrote what he felt like writing.  It took him six years of research and writing to complete Dune, and after all that struggle and sacrifice, 23 publishers rejected it in book form before it was finally accepted. He received an advance of only $7,500.

His loving wife of 37 years, Beverly, was the breadwinner much of the time, as an underpaid advertising writer for department stores.  Having been divorced from his first wife, Flora Parkinson, Frank Herbert met Beverly Stuart at a University of Washington creative writing class in 1946.  At the time, they were the only students in the class who had sold their work for publication.  Frank had sold two pulp adventure stories to magazines, one to Esquire and the other to Doc Savage.  Beverly had sold a story to Modern Romance magazine.  These genres reflected the interests of the two young lovers; he the adventurer, the strong, machismo man, and she the romantic, exceedingly feminine and soft-spoken.

Their marriage would produce two sons, Brian, born in 1947, and Bruce, born in 1951. Frank also had a daughter, Penny, born in 1942 from his first marriage.  For more than two decades Frank and Beverly would struggle to make ends meet, and there were many hard times.  In order to pay the bills and to allow her husband the freedom he needed in order to create, Beverly gave up her own creative writing career in order to support his.  They were in fact a writing team, as he discussed every aspect of his stories with her, and she edited his work.  Theirs was a remarkable, though tragic, love story-which Brian would poignantly describe one day in Dreamer of Dune (Tor Books; April 2003).  After Beverly passed away, Frank married Theresa Shackelford.

In all, Frank Herbert wrote nearly 30 popular books and collections of short stories, including six novels set in the Dune universe: Dune, Dune Messiah, Children of Dune, God Emperor of Dune, Heretics of Dune, and Chapterhouse: Dune.  All were international bestsellers, as were a number of his other science fiction novels, which include The White Plague and The Dosadi Experiment.  His major novels included The Dragon in the Sea, Soul Catcher (his only non-science fiction novel), Destination: Void, The Santaroga Barrier, The Green Brain, Hellstorm's Hive, Whipping Star, The Eyes of Heisenberg, The Godmakers, Direct Descent, and The Heaven Makers. He also collaborated with Bill Ransom to write The Jesus Incident, The Lazarus Effect, and The Ascension Factor.  Frank Herbert's last published novel, Man of Two Worlds, was a collaboration with his son, Brian.

Katherine Kellgren has recorded over 200 audiobooks and won four Audie Awards, three ALA Odyssey Honors, and eight AudioFile Earphones Awards. In 2011, Kellgren was named the  Best Voice in Young Adult & Fantasy, and she won the Audie award for Best Female Narrator in both 2013 and 2014.  Kellgren has also appeared onstage in London, New York and Frankfurt. She has recorded numerous plays and dramatizations of novels for the radio, including winners of the Peabody Award. She is a graduate of The London Academy of Music and Dramatic Art. In naming Kellgren a “Golden Voice,” AudioFile magazine noted that she is a "marvel with accents...she is definitely a narrator to keep an ear out for." She lives in New York City.
Loading...
or
Not Currently Available for Direct Purchase