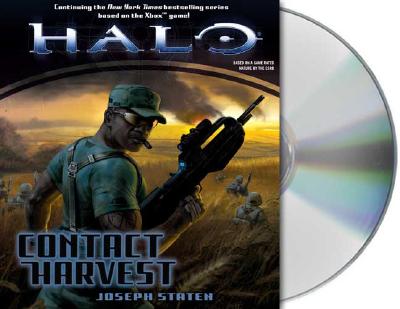 This is how it began... It is the year 2524.  Harvest is a peaceful, prosperous farming colony on the very edge of human-controlled space.  But we have trespassed on holy ground--strayed into the path of an aggressive alien empire known as the Covenant.  What begins as a chance encounter between an alien privateer and a human freighter catapults mankind into a struggle for its very existence. But humanity is also locked in a bitter civil war known as the Insurrection.  So the survival of Harvest's citizens falls to a squad of battle-weary UNSC Marines and their inexperienced colonial militia trainees.  In this unlikely group of heroes, one stands above the rest...a young Marine staff sergeant named Avery Johnson. Got lost in the Halo universe with Joseph Staten's Halo: Contact Harvest.

Joseph Staten started with BUNGIE STUDIOS in 1998, and has since served as a writer and designer for ONI (2001) as well as writer and cinematics director for HALO (2001) and HALO 2 (2004). Currently writing HALO 3, Joseph is also working with Peter Jackson's newly formed game development studio, WINGNUT INTERACTIVE, writing and designing an as-of-yet unannounced game set in the Halo universe. Holter Graham, winner of AudioFile's 2008 Best Voice in Science Fiction & Fantasy for Sherrilyn Kenyon's "Acheron," is a stage, television, and screen actor. A recipient of an AudioFile Earphones Award, he has recorded numerous audiobooks, including multiple books from Sherrilyn Kenyon's sensationally bestselling Dark-Hunter series. He has also narrated audiobooks for such authors as Scott Turow, Dean Koontz, John Berendt, and Stephen Frey. His film credits include Fly Away Home, Maximum Overdrive, Hairspray, and The Diversion, a short film which he produced and as well as acted in. On television, he has appeared in Army Wives, Damages, As The World Turns, Rescue Me, Law & Order and New York Undercover. He received a B.A. from Skidmore College and an M.F.A. from Vermont College. Jennifer Taylor is a professional actress hailing from Seattle, Washington. She graduated from Northwestern University with a degree in Theatre. She performs on stage, in radio and television commercials, and on the air as a disc jockey for a Seattle radio station. She has lent her voice to numerous video games, including F.E.A.R. 2: Project Origin, Left 4 Dead, Left 4 Dead 2, Saw, and Super Princess Peach. She is perhaps best known as the voice of Cortana for the Halo video games.
Loading...
or
Not Currently Available for Direct Purchase