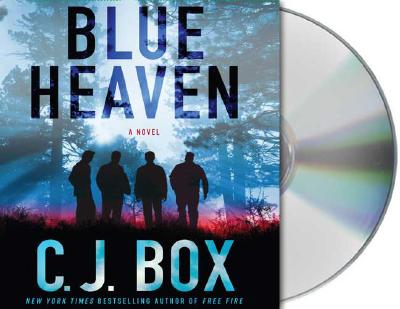 A twelve-year-old girl and her younger brother are on the run in the Idaho woods, pursued by four men they have just watched commit murder four men who know exactly who William and Annie are. And where their mother lives.

Retired policemen from Los Angeles, the killers easily persuade the local sheriff to let them lead the search for the missing children. Now there's nowhere left for William and Annie to hide and no one they can trust. Until they meet Jess Rawlins.

Rawlins, an old-school rancher, knows trouble when he sees it. He is only one against four men who will stop at nothing to silence their witnesses. But in this thrilling mystery novel from C.J. Box, these ex-cops don't know just how far Rawlins will go to protect William and Annie and see that justice is done.

C.J. Box is the author of several novels including the award-winning Joe Pickett series. He's the winner of the Anthony Award, Prix Calibre 38 (France), the Macavity Award, the Gumshoe Award, the Barry Award, and an Edgar Award and L.A. Times Book Prize finalist. Open Season was a 2001 New York Times Notable Book. Box lives with his family outside of Cheyenne, Wyoming.John Bedford Lloyd, a graduate of Yale's School of Drama, has appeared in a host of major motion pictures, including The Bourne Supremacy, Crossing Delancey, The Abyss, The Manchurian Candidate, and Philadelphia. His television credits include Suits, Pan Am, Law & Order, Spin City, and The West Wing. His critically-acclaimed audiobook narration includes reading for authors such as Michael Crichton, Nicholas Sparks, Paul Doiron, and Atul Gawande, among others.

“John Bedford Lloyd’s rich, distinctive voice brings a strong sense of power to his reading of Box’s first stand-alone thriller…Lloyd’s crisp, laconic delivery easily handles a multitude of characters, accents and shifting points of view, creating just the right tone for the material and drawing the listener deep into the action of the story.  He portrays his villains (a band of dirty ex-cops) with just the right amount of ruthless menace without going overboard, and he perfectly captures the essence of the aging rancher, imbuing him with the quiet strength and dignity of an iconic western hero.” – Publishers Weekly, Starred Review

“Blue Heaven is a non-stop thrill ride—a provocative suspense novel that has you rooting for the characters every step of the way.”—Harlan Coben, author of The Woods

“Blue Heaven is a relentless thriller. C.J. Box sucked me in with good cops, bad cops, and missing money, then blind-sided me with unexpected twists and surprises in this novel of clashing cultures and dark secrets. Box delivers the goods!”—Robert Crais, author of The Watchman: A Joe Pike Novel

“Blue Heaven is one of the best thrillers of the year, and it kept me up most of the night, the way few books have ever done. C.J. Box owes me a night’s sleep!”—Tess Gerritsen, author of  The Mephisto Club