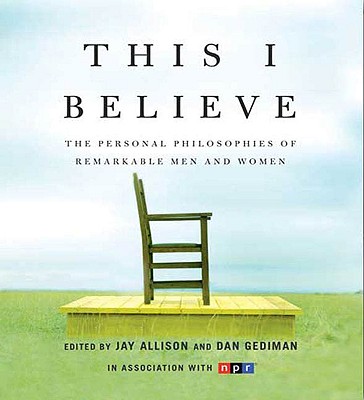 This I Believe (Compact Disc)

The Personal Philosophies of Remarkable Men and Women

Based on the NPR series of the same name, This I Believe features 80 Americans—from the famous to the unknown—completing the thought that begins with the book’s title. The pieces that make up the program compel listeners to re-think not only what and how they have arrived at their own personal beliefs, but also the extent to which they share them with others.
Featuring a star-studded list of contributors that includes John McCain, Isabel Allende, and Colin Powell (as well as pieces from the original 1950’s series including Helen Keller and Jackie Robinson), the collection also contains essays by a Brooklyn lawyer, a woman who sells yellow pages advertising in Fort Worth, TX and a man who serves on the state of Rhode Island’s parole board. The result is a stirring, funny and always provocative trip inside the minds and hearts of a diverse group of Americans whose beliefs, and the incredibly varied ways in which they choose to express them, reveal the American spirit at its best.

Jay Allison, the host of "This I Believe," is an independent broadcast journalist. His work airs on NPR's "All Things Considered" and "Morning Edition," PRI's "This American Life," ABC News' "Nightline," and other national programs.

Dan Gediman, is the Executive Producer of "This I Believe." His work has been heard on "All Things Considered, Morning Edition, Fresh Air, Marketplace, Soundprint, Jazz Profiles," and "This American Life."

Praise For This I Believe: The Personal Philosophies of Remarkable Men and Women…

“To hold this range of beliefs in the palm of your hand is as fine, as grounding, as it was hearing them first on the radio. Heartfelt, deeply cherished beliefs, doctrines for living (yet none of them doctrinaire). Ideas and ideals that nourish. You can see it in their faces, in the photos in this book. And read it in their words. I’m so proud that NPR helped carry this Edward R. Murrow tradition into a new century. And so glad to have it in print, to encounter again and again.”—Susan Stamberg, special correspondent, National Public Radio
“My father, Edward R. Murrow, said that “fresh ideas” from others helped him confront his own challenges. This superb collection of thought-provoking This I Believe essays, both from the new program heard on NPR and from the original 1950s series, provides fresh ideas for all of us!”—Casey Murrow, Elementary education publisher
“Reading this gives me a feeling about this country I rarely get: a very visceral sense of all the different kinds of people who are living together here, with crazily different backgrounds and experiences and dreams. Like a Norman Rockwell painting where all the people happen to be real people, and all the stories are true. It makes me feel hopeful about America, reading this. Hopeful in a way that’s in short supply lately.”—Ira Glass, Producer and Host of This American Life
“Now, as then, when Edward R. Murrow introduced the idea of This I Believe, this forward-thinking compilation serves as a wonderful antidote to the cynicism of the age.”—Daniel Schorr, Senior News Analyst, NPR, and former colleague of Edward R. Murrow