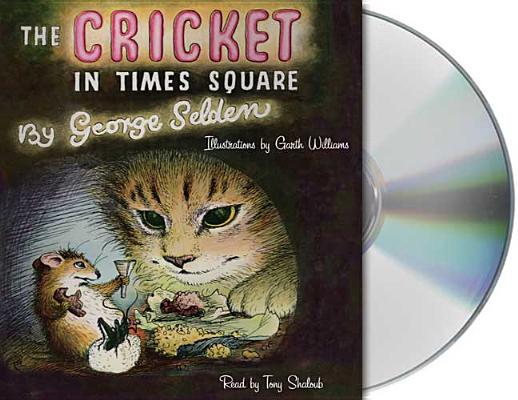 Tucker is a streetwise city mouse. He thought he'd seen it all. But he's never met a cricket before, which really isn't surprising, because, along with his friend Harry Cat, Tucker lives in the very heart of New York City—the Times Square subway station. Chester Cricket never intended to leave his Connecticut meadow. He'd be there still if he hadn't followed the entrancing aroma of liverwurst right into someone's picnic basket. Now, like any tourist in the city, he wants to look around. And he could not have found two better guides—and friends—than Tucker and Harry.

“Read by Tony Shalhoub, Selden's story of a clueless insect in New York lights up with the sounds of the city.” —People magazine

“Young listeners and their grown-ups will thoroughly enjoy Tony Shalhoub's dramatic reading of The Cricket in Times Square. His stage voice captures every nuance of emotion is George Selden's 1960 novel about a cricket from Connecticut who winds up in New York City and survives with the help of a friendly mouse and cat. This warm and fuzzy tale hasn't lost a hair of charm in 50 years.” —The Sacramento Bee

“With the talents of Tony Shalhoub, Chester Cricket, Harry Cat, and Tucker Mouse become real characters that the listener can instantly relate to.... Mr. Shalhoub creates unique voices for each of the characters, and from the very beginning, it is easy to decipher which character is doing the speaking.... For anyone not familiar with the classic tale, listening to it will be an adventure. And for those that know the sweet tale of Chester finding himself in a foreign land (at least for him), listening to the story will be a treat.” —TeensReadToo.com

“The fabulous adventures of Chester Cricket, Harry Cat and Tucker Mouse are charmingly detailed by George Selden in his Newbery Honor book...Narrated here by Tony Shaloub, it's guaranteed to please the whole family.” —BookPage

“Emmy-winner Shalhoub is nothing short of wonderful. The ease with which he spins different accents adds immeasurable color to the story.” —Cookie Magazine

Tony Shalhoub is best known for his role as obsessive-compulsive detective Adrian Monk in the hit television series Monk, for which he has won a Golden Globe and three Emmy Awards for Outstanding Lead Actor in a Comedy Series. He received a Grammy nomination for his narration of George Selden's Newbery Honor-winning children's book The Cricket in Times Square for Macmillan Audio. Shalhoub has also appeared in films including Feed the Fish, Careless, Spy Kids, Galaxy Quest, Men in Black, Men in Black, II, and Big Night, and he provided the voice of Luigi for Cars. He has acted in Broadway productions of The Odd Couple, Conversations with My Father (for which he was nominated for a Tony Award), The Heidi Chronicles, and Lend Me a Tenor.