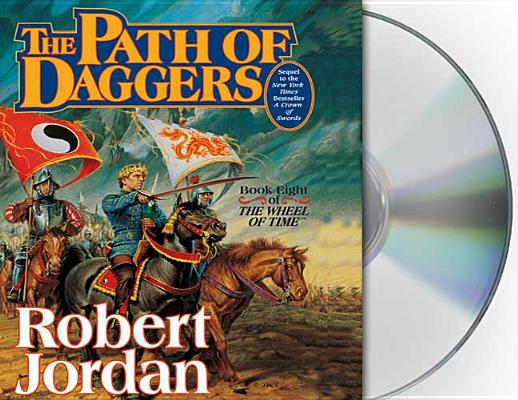 The Path of Daggers

Book Eight of 'The Wheel of Time'

The Seanchan invasion force is in possession of Ebou Dar. Nynaeve, Elayne, and Aviendha head for Caemlyn and Elayne's rightful throne, but on the way they discover an enemy much worse than the Seanchan.

In Illian, Rand vows to throw the Seanchan back as he did once before. But signs of madness are appearing among the Asha'man.

In Ghealdan, Perrin faces the intrigues of Whitecloaks, Seanchan invaders, the scattered Shaido Aiel, and the Prophet himself. Perrin's beloved wife, Faile, may pay with her life, and Perrin himself may have to destroy his soul to save her.

Meanwhile the rebel Aes Sedai under their young Amyrlin, Egwene al'Vere, face an army that intends to keep them away from the White Tower. But Egwene is determined to unseat the usurper Elaida and reunite the Aes Sedai. She does not yet understand the price that others--and she herself--will pay.


Praise For The Path of Daggers: Book Eight of 'The Wheel of Time'…

“Robert Jordan has come to dominate the world Tolkien began to reveal....The battle scenes have the breathless urgency of firsthand experience, and the...evil laced into the forces of good, the dangers latent in any promised salvation, the sense of the unavoidable onslaught of unpredictable events bear the marks of American national experience during the last three decades.” —The New York Times on The Wheel of Time