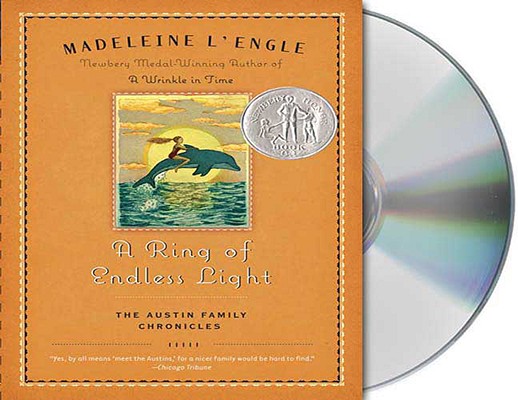 After a tumultuous year in New York City, the Austins are spending the summer on the small island where their grandfather lives. He’s very sick, and watching his condition deteriorate as the summer passes is almost more than Vicky can bear. To complicate matters, she finds herself as the center of attention for three very different boys.
Zachary Grey, the troubled and reckless boy Vicky met last summer, wants her all to himself as he grieves the loss of his mother. Leo Rodney has been just a friend for years, but the tragic loss of his father causes him to turn to Vicky for comfort—and romance. And then there’s Adam Eddington. Adam is only asking Vicky to help with his research on dolphins. But Adam—and the dolphins—may just be what Vicky needs to get through this heartbreaking summer.

Madeleine L'Engle (1918-2007) was born in New York City and attended Smith College. She wrote more than 60 books, the most famous of which is "A Wrinkle In Time" (1962), winner of the Newbery Award in 1963. L'Engle continued the story of the Murry family from "A Wrinkle In Time" with seven other novels (five of which are available as "A Wrinkle In Time "Quintent from Square Fish). She also wrote the famous series featuring the Austin family, beginning with the novel "Meet The Austins" (1960). L'Engle revisited the Austins four more times over the next three decades, concluding with "Troubling a Star" in 1994. The story of the Austins had some autobiographical elements, mirroring Madeleine's life and the life of her family. Madeleine L'Engle's last book, "The Joys of Love," is a romantic, coming-of-age story she wrote back in the 1940s, and is being published by FSG.

Praise For A Ring of Endless Light - CANCELLED…

“With customary grace and firm control of an intricate plot, L’Engle has created another irresistible novel about familiar characters, the Austin family. Vicky, 16, narrates the climactic events with Grandfather Eaton on a New England island, where he is living his last days.”—Publishers Weekly
“L’Engle has the magic storytelling gift that makes it a pleasure to lose yourself in her spell.”—Newsweek
“L’Engle writes eloquently about death and life with provocative passages that linger in the thoughts of the perceptive.”—Booklist, Starred Review