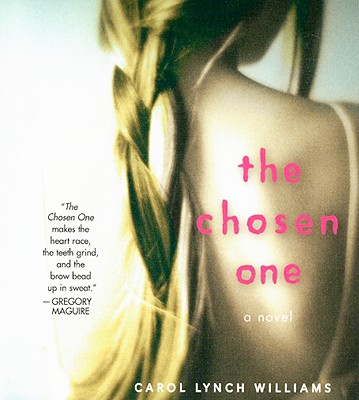 “Carol Lynch Williams has written the suspenseful, realistic story of a 13-yearold girl in an isolated polygamous community whose enforced engagement to her 60-year-old uncle reveals the truth about the religious leadership's corrupt motives and controlling, misogynistic underpinnings. Williams has done an amazing job of bringing some ugly truths to light, while celebrating the resilience, love, and spirit of the young women who survive the experience.”
— Elizabeth Bluemle, Flying Pig Boooks, Shelburne, VT
View the List

Thirteen-year-old Kyra has grown up in an isolated polygamous community without questioning her father’s three wives and her twenty brothers and sisters. Or at least without questioning them much—if you don’t count her secret visits to the Mobile Library on Wheels to read forbidden books, or her meetings with the boy she hopes to choose for herself instead of having a man chosen for her. But when the Prophet decrees that Kyra must marry her 60-year-old uncle—who already has six wives—Kyra must make a desperate choice in the face of violence and her own fears of losing her family.


Praise For The Chosen One…

"[Lamia's] powerful performance of THE CHOSEN ONE brings its 13-year-old protagonist to vivid life." - AudioFile

“With dramatic pauses and emotive voice, Jenna Lamia delivers a captivating read, making the listener yearn for more.” - Parents' Choice Awards, Parents' Choice 2009 Recommended Award Winner"Narrator Jenna Lamia brings passion and dignity to Kyra, her sisters, and even the strict elders who want all the girls for themselves...Lamia's voices sounds believably young and brings surprising gravity to this ripped-from-the-headlines story." - AudioFile "Jenna Lamia strikes just the right note between innocence and a growing sense of rebellion in her characterization of Kyra..."--Kirkus Reviews "Narrator Jenna Lamia's searing, poignant performance will stay with listeners long after the book ends as she draws listeners in and never lets go, making them feel as if Kyra is living with them as they hear her story...Outstanding." - Sound Commentary "From the opening of The Chosen One, the audiobook for which she won her recent Audie, listeners will identify with Jenna's well-rounded portrayal of the protagonist, Kyra, a young woman trapped in a cult." - AudioFile "Jenna Lamia...does a pitch-perfect version of Kyra."--Kidlit.com "Jenna Lamia's vocal interpretation pitches just the right tone for a dutiful but independent 13-year-old chafing against the rules that allow her no privacy –  a conflict any teenager can understand." - Newsday "The Chosen One by Carol Lynch Williams captivated me frm the moment I started listening to it. If you have tweens or teens in your house, the audiobook would be a perfect way to while away a few hours on a roadtrip, or to enjoy as a family in the evenings as an alternative to the boob tube." - 5minutesforbooks.com "The reading of the unabridged audiobook by Jenna Lamia is dramatically right." – Metapsychology "Jenna Lamia brings the perfect tone and emotions to thirteen-year-old Kyra and enables the listeners to hear her adness, anger, and love for her family." - Forever a Young Adult Advance praise for the book: “…this is a heart pounder, and readers will be held, especially as the danger escalates.  Williams’ portrayals of the family are sharp, but what’s most interesting about this book is how the yearnings and fears of a character so far from what most YAs know will still seem familiar and close.” --Booklist “The Chosen One makes the heart race, the teeth grind, and the brow bead up in sweat. Carol Lynch Williams presents a first-person narrative that gallops just behind--or perhaps in advance of--contemporary headlines about the manipulation of the innocent. I could choose no other book or newspaper until I had finished the final page." --Gregory Maguire, the New York Times bestselling author of Wicked and A Lion Among Men "A powerful and heartbreaking novel of love and hope.  One girl's poignant journey as she struggles to find herself and, ultimately, the truth." --Meg Cabot, New York Times bestselling author of The Princess Diaries and Airhead “The Chosen One is absolutely riveting and perfectly formed.  I had planned to read just a few pages one evening before bed, and I ended up staying awake until four in the morning to finish it!  It’s a wonderful book.” --Cynthia Kadohata, winner of the 2005 Newbery Medal for Kira-Kira “In this extraordinary story, Carol Lynch Williams probes the deepest wells of the heart.  Against the intertwining prism of faith and love she gives us Kyra, a young woman who meets head-on the power of both to simultaneously buoy and corrupt the human spirit.  The Chosen One is brave, its plumb is true, it's a masterpiece." --Kathi Appelt, author of The Underneath, Finalist for the 2008 National Book Award for Young People’s Literature "Carol Lynch Williams’ chilling novel of life in a polygamous sect is both harrowing in its unsparing realism and hopeful in its reaffirmation of the power that books and reading have to change and redeem lives at risk. An important book, sure to provoke spirited discussion." --Michael Cart, Booklist columnist and former president, Young Adult Library Services Association “Powerful and unforgettable, The Chosen One will break your heart because its story is all too real.” --David Ebershoff, the New York Times bestselling author of The 19th Wife “Truly thought provoking, heartfelt and just a plain old good read about a culture and religion that we know very little about these days except through the media.” --An Na, author of A Step From Heaven, winner of the 2002 Michael L. Printz Award for Excellence in Young Adult Literature “An unsettling and courageous story about one girl who sacrifices everything familiar in her search for freedom--physical freedom and, more importantly, freedom of the heart and mind. Though the book is chilling from page one, Carol Lynch Williams' economic and poetic use of language makes this potentially sensational story somehow beautiful, compassionate, and full of hope in the midst of tremendous loss. This is not a black and white exposé of cults, but a complex exploration of the ties that bind us to places and people that hurt us, the wrenching decisions we sometimes must make in order to survive, and the saving power of the truth, no matter how difficult it may be to bear.” --Sara Zarr, author of the 2007 National Book Award Finalist Story of a Girl


“Skilled writing, a narrator you root for, and [a] compelling glimpse into a secret world.” --Deb Caletti, author of the National Book Award finalist Honey, Baby, Sweetheart

“Imagine Anna Quindlen or Sue Miller turning her attention to writing a young adult novel. . . . Be forewarned: This book is a compulsive read.” --Audrey Couloumbis, author of the Newbery Honor Book Getting Near to Baby


“No doubt about it, THE CHOSEN ONE is one of the best books of the year! I couldn't put it down. Carol Lynch Williams grabs you with her literary talents and never lets you go. Kyra still haunts me. I'll be talking about this book in workshops all year long.” --M. Jerry Weis, Distinguished Service Professor, New Jersey City University, and past president of ALAN

“Kyra reminds me of my high school classmate in Utah who married her sister’s husband and descended into a netherworld of poverty, abuse, and humiliation.  Carol Lynch Williams’ remarkable story of Kyra’s fight to free herself from a culture that degrades and dehumanizes women is really a story of the triumph of the human spirit.  This book matters!” --Sandra Dallas, author of Prayers for Sale

Carol Lynch Williams is the author of young adult novels including "Miles from Ordinary." "The Chosen One" was named one of 2010 ALA's "Quick Picks for Reluctant Young Adult Readers" and "Best Books for Young Adult Readers." It also won the Whitney and the Association of Mormon Letters awards for the best young adult fiction of the year, as well as numerous other honors. Williams was the winner of the 2009 PEN/Phyllis Naylor Working Writer Fellowship. She grew up in Florida and now lives in Utah. Jenna Lamia is the acclaimed narrator ofMary E. Pearson's "The Adoration of Jenna Fox," which won a YALSA Amazing Audiobooks for Young Adults award, and Carol Lynch Williams's "The Chosen One," for which Jenna received the 2010 solo narration (female) Audie Award. Lamia made her Broadway debut in 1988 in "Ah, Wilderness," and she's also appeared off-Broadway in "The Glory Of Living," directed by Philip Seymour Hoffman. Her other acting credits include appearances on "Oz, Law & Order: SVU, The Jury, " and "NYPD Blue." She's also appeared in the films "The Fighter, The Box, " and "Something's Wrong in Kansas."She attended Amherst College, New York University, and the Sorbonne in Paris.
Loading...
or
Not Currently Available for Direct Purchase