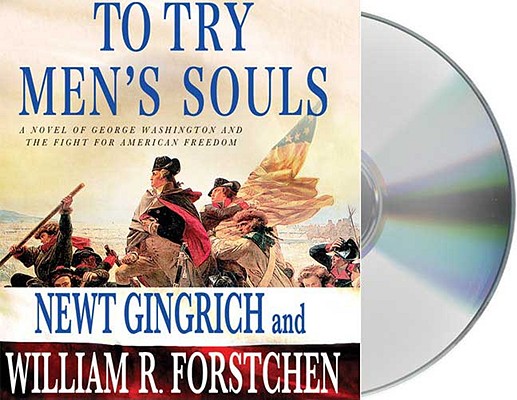 A Novel of George Washington and the Fight for American Freedom

The action focuses on one of the most iconic events in American history: Washington crossing the Delaware. Unlike the bold, courageous General in Emanuel Leutze's painting, Washington is full of doubt on the night of December 25, 1776. After five months of defeat, morale is dangerously low. Each morning muster shows that hundreds have deserted in the night. While Washington prepares his weary troops for the attack on Trenton, Thomas Paine is in Philadelphia, overseeing the printing of his newest pamphlet, "The Crisis." And Jonathan Van Dorn is about to bring the war to his own doorstep. In the heat of battle, he must decide between staying loyal to the cause and sparing his brother who has joined up with the British.

Through the thoughts and private fears of these three men, Gingrich and Forstchen illuminate the darkest days of the Revolution. With detailed research and an incredible depth of military insight, "To Try Men's Souls" is a novel that provides a rare and personal perspective of the men who fought for, and founded the United States of America.


Praise For To Try Men's Souls: A Novel of George Washington and the Fight for American Freedom…

"This fictionalized account of the crossing of the Delaware River during the Revolutionary War goes way beyond the textbook versions. William Dufris, as the main narrator, traces the journeys of three very different men—George Washington, Thomas Paine, and Jonathon Van Dorn—portraying the distinct manner of each character." - AudioFile "Narrators William Dufris, Callista Gingrich, and Eric Conger are excellent in their conveying of emotion and accents, making us privy to these characters' thoughts and fears, their courage and determination." - Library Journal

NEWT GINGRICH, former Speaker of the House, is the author of several bestselling books, including Pearl Harbor and Gettysburg. He is a member of the Defense Policy Board and is the longest-serving teacher of the Joint War Fighting course for Major Generals. WILLIAM R. FORSTCHEN, PH.D., is a Faculty Fellow at Montreat College and is the author of more than 40 books, including the New York Times bestseller One Second After and We Look Like Men of War. Callista Gingrich is the wife of former Speaker of the House Newt Gingrich and the president of Gingrich Productions, a performance and production company focusing on audio, video, and photographic production. She has narrated several audiobooks, including To Try Men's Souls and Valley Forge for Macmillan Audio. She lives with her husband in McLean, Virginia.Eric Conger has narrated more than 80 audiobooks, and AudioFile magazine has called him ..".simply the best. With no self-consciousness or discernible vocal flaws, his energy and emotional investment are consistent start to finish." Conger has worked on a number of audiobooks that have garnered Earphones Awards, including William D. Novelli and Boe Workman's 50+ and Frederick Forsyth's Avenger, both published by Macmillan Audio. William Dufris has been nominated six times as a finalist for the APA's prestigious Audie Awards. He garnered eighteen Golden Earphones Awards through AudioFile magazine, which honored him as one of "The Best Voices At The End Of The Century." Of his work, AudioFile magazine said, "William Dufris commands a dazzling array of voices that bring to life the dozens of audiobooks he's narrated." His other narrations include Newt Gingrich and William R. Forstchen, Ph.D.'s Days of Infamy and Pearl Harbor, Tom Perrota's Nine Inches, and John Scalzi's The Human Division.
or
Not Currently Available for Direct Purchase