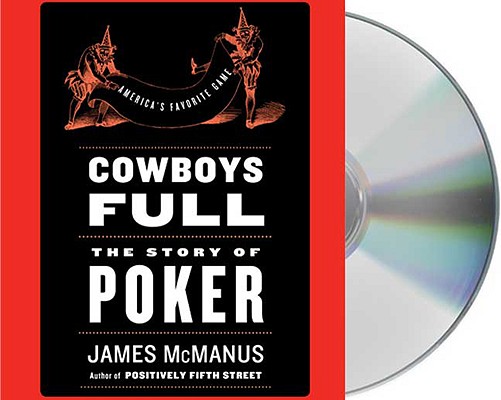 The Story of Poker

From James McManus, author of the bestselling "Positively Fifth Street," comes the definitive story of the game that, more than any other, reflects who we are and how we operate.

"Cowboys Full "is the story of poker, from its roots in China, the Middle East, and Europe to its ascent as a global--but especially an American--phenomenon. It describes how early Americans took a French parlor game and, with a few extra cards and an entrepreneurial spirit, turned it into a national craze by the time of the Civil War. From the kitchen-table games of ordinary citizens to its influence on generals and diplomats, poker has gone hand in hand with our national experience. Presidents from Abraham Lincoln to Barack Obama have deployed poker and its strategies to explain policy, to relax with friends, to negotiate treaties and crises, and as a political networking tool. The ways we all do battle and business are echoed by poker tactics: cheating and thwarting cheaters, leveraging uncertainty, bluffing and sussing out bluffers, managing risk and reward.

"Cowboys Full "shows how what was once accurately called the cheater's game has become amostly honest contest of cunning, mathematical precision, and luck. It explains how poker, formerly dominated by cardsharps, is now the most popular card game in Europe, East Asia, Australia, South America, and cyberspace, as well as on television. It combines colorful history with firsthand experience from today's professional tour. And it examines poker's remarkable hold on American culture, from paintings by Frederic Remington to countless poker novels, movies, and plays. Braiding the thrill of individual hands with new ways of seeing poker's relevance to our military, diplomatic, business, and personal affairs, "Cowboys Full "is sure to become the classic account of America's favorite pastime.

James McManus has covered poker for "The New York Times," "Los Angeles Times," "Harper's Magazine," "Card Player," ESPN.com, and "The NewYorker.""Positively Fifth Street "(FSG, 2003), his memoir of finishing fifth in the World Series of Poker championship event, was a "New York Times "bestseller and is already considered a classic.
Loading...
or
Not Currently Available for Direct Purchase