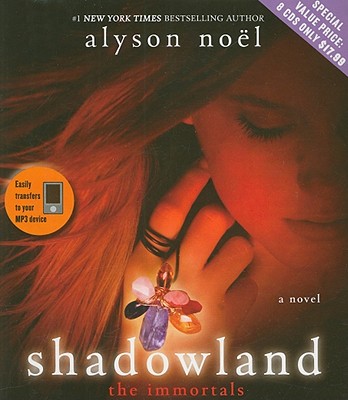 "Enter the realm of the Immortals--the #1 New York Times bestselling series that's been acclaimed as breathtaking, mesmerizing, flawless and extraordinary."

Ever and Damen have traveled through countless past lives--and fought off the world's darkest enemies--so they could be together forever. But just when their long-awaited destiny is finally within reach, a powerful curse falls upon Damen...one that could destroy everything. Now a single touch of their hands or a soft brush of their lips could mean sudden death--plunging Damen into the Shadowland. Desperate to break the curse and save Damen, Ever immerses herself in magick--and gets help from an unexpected source...a surfer named Jude.

Although she and Jude have only just met, he feels startlingly familiar. Despite her fierce loyalty to Damen, Ever is drawn to Jude, a green-eyed golden boy with magical talents and a mysterious past. She's always believed Damen to be her soulmate and one true love--and she still believes it to be true. But as Damen pulls away to save them, Ever's connection with Jude grows stronger--and tests her love for Damen like never before...

Alyson Noel is the #1 "New York Times" bestselling, award-winning author of the Immortals series, including "Evermore, Blue Moon, Dark Flame," and "Night Star," as well as the Immortals spin-off series beginning with "Radiance." She is also the author of "Faking 19, Art Geeks and Prom Queens, Laguna Cove, Fly Me to the Moon, Kiss & Blog, Saving Zoe," and "Cruel Summer." With over 2 million copies in print in the US alone, her books have been published in 35 countries and have won awards including the National Reader's Choice Award, NYLA Book of Winter Award, NYPL Stuff for the Teenage, TeenReads Best Books of 2007, and Reviewer's Choice 2007 Top Ten, and have been chosen for the CBS Early Show's "Give the Gift of Reading" segment, and selected for Seventeen Magazine's "Hot List" and Beach Book Club Pick. She lives in Laguna Beach, California. Katie Schorr's audiobook credits include narrating the novels in Alyson Noel's bestselling "Immortals" series - "Evermore, Blue Moon, Shadowland," and "Dark Flame." Of her work on the series, "AudioFile" magazine has said, "Narrator Katie Schorr has a wonderfully raspy, youthful voice, which she puts to good effect on the cast of teenaged characters."Schorr's one-woman show, "Take Me. Seriously.," ran for six months at The Upright Citizens Brigade Theater, and she performs throughout New York in new works at The Ensemble Studio Theater and Ars Nova, among other theaters. She has appeared on VH1's "Best Week Ever" and co-stars in the web series "Head in the Oven" with Saturday Night Live actor Bill Hader. She is the co-creator of Yoga Partners: A Web Series.
Loading...
or
Not Currently Available for Direct Purchase