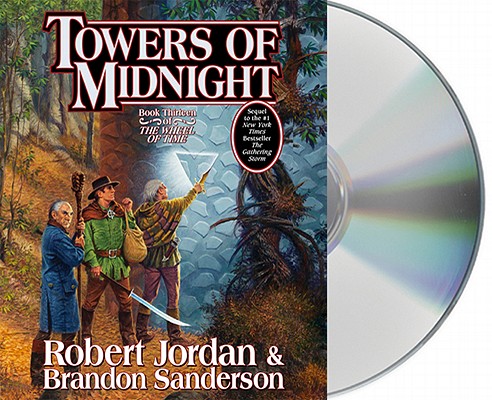 Book Thirteen of The Wheel of Time

In Towers of Midnight, the Last Battle has started. The seals on the Dark One's prison are crumbling. The Pattern itself is unraveling, and the armies of the Shadow have begun to boil out of the Blight.

The sun has begun to set upon the Third Age.

Perrin Aybara is now hunted by specters from his past: Whitecloaks, a slayer of wolves, and the responsibilities of leadership. All the while, an unseen foe is slowly pulling a noose tight around his neck. To prevail, he must seek answers in Tel'aran'rhiod and find a way--at long last--to master the wolf within him or lose himself to it forever.

Meanwhile, Matrim Cauthon prepares for the most difficult challenge of his life. The creatures beyond the stone gateways--the Aelfinn and the Eelfinn--have confused him, taunted him, and left him hanged, his memory stuffed with bits and pieces of other men's lives. He had hoped that his last confrontation with them would be the end of it, but the Wheel weaves as the Wheel wills. The time is coming when he will again have to dance with the Snakes and the Foxes, playing a game that cannot be won. The Tower of Ghenjei awaits, and its secrets will reveal the fate of a friend long lost.

Dovie'andi se tovya sagain. It's time to toss the dice.


Praise For Towers of Midnight: Book Thirteen of The Wheel of Time…

“The battle scenes have the breathless urgency of firsthand experience, and the . . . evil laced into the forces of good, the dangers latent in any promised salvation, the sense of the unavoidable onslaught of unpredictable events bear the marks of American national experience during the last three decades, just as the experience of the First World War and its aftermath gave its imprint to J. R. R. Tolkien's work.” —The New York Times on The Wheel of Time®