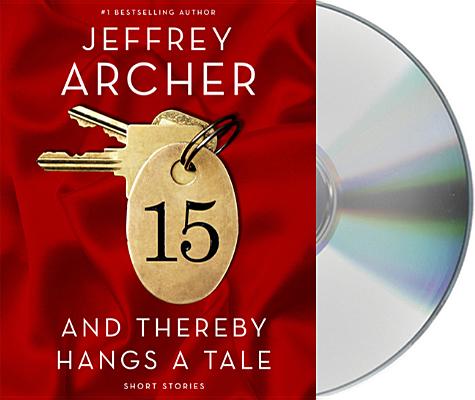 And Thereby Hangs a Tale (CD-Audio)

In India, Jamwal and Nisha fall in love while waiting for a traffic light to turn green on the streets of Delhi.

From Germany comes "A Good Eye," the tale of a priceless oil painting that has remained in the same family for over two hundred years, until...

To the Channel Islands and "Members Only," where a golf ball falls out of a Christmas cracker, and a young man's life will never be the same...

To Italy and "No Room at the Inn," where a young man who is trying to book a room at a hotel ends up in bed with the receptionist, unaware that she...

To England, where, in "High Heels," a woman has to explain to her husband why a pair of designer shoes couldn't have gone up in flames...

Some of these stories will make you laugh while others will bring you to tears but, once again, every one of them will demand that you keep turning the page until you finally discover what happens to this remarkable cast of characters.

Gerard Doyle reads everything from adult, young adult, and children's books to literary fiction, mysteries, humor, adventure, and fantasy. He has won countless AudioFile Earphones Awards and was named a Best Voice in Young Adult Fiction in 2008. His audiobook credits include the bestselling Inheritance series (Eragon, Eldest, and Brisinger),  How to Train Your Dragon, The Looking Glass Wars, Clubland, And Thereby Hangs a Tale, and Risk Worth Taking. His career in British repertory theatre includes many productions, most notably The Crucible, The Tempest, The Importance of Being Earnest, and Fiddler on the Roof.  In America, he has appeared in Broadway in The Weir and on television in New York Undercover and Law & Order.  Born of Irish parents and raised and educated in England, Gerard has taught drama at Ross School for the past several years.

Praise For And Thereby Hangs a Tale: Short Stories…

Praise for the Short Stories of Jeffrey Archer

“Jeffrey Archer plays a subtle cat-and-mouse game with the reader in twelve original short stories that end, more often than not, with our collective whiskers twitching in surprise.”
---The New York Times

“The economy and precision of Archer’s prose never fails to delight. The criminal doesn’t always get away with his crime and justice doesn’t always prevail, but the reader wins with each and every story.”
---Publishers Weekly