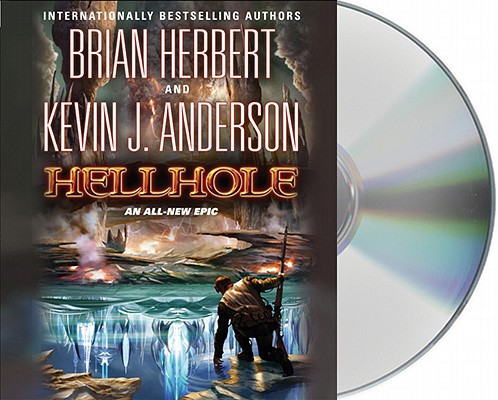 Only the most desperate colonists dare to make a new home on Hellhole. Reeling from a recent asteroid impact, tortured with horrific storms, tornadoes, hurricanes, earthquakes, and churning volcanic eruptions, the planet is a dumping ground for undesirables, misfits, and charlatans but also a haven for dreamers and independent pioneers.

Against all odds, an exiled general named Adolphus has turned Hellhole into a place of real opportunity for the desperate colonists who call the planet their home. While the colonists are hard at work developing the planet, General Adolphus secretly builds alliances with the leaders of the other Deep Zone worlds, forming a clandestine coalition against the tyrannical, fossilized government responsible for their exile.

“This new space epic from the best-selling team of Herbert and Anderson is wide and complex…Audie Award winner Scott Brick’s performance keeps the suspense elevated. Fear not, these authors will deliver the rest of the story on schedule. Fans of traditional sf fare will keep this, and future volumes, moving off the shelves.” – Library Journal, starred review

“[Scott Brick] manages to capture the fiery determination of exiled General Adolphus and the cold calculating cruelty of Diadem Michella while still allowing the listener’s imagination to fill in the gaps. The book’s many other viewpoint characters also find unique expression in Brick’s capable hands…Hellhole manages to stand out as a science fiction novel that succeeds in all the areas that the genre should. It’s cerebrally engaging, spiritually challenging, and yet emotionally powerful as a story in its own right. I’m very excited to find out what the next two volumes have in store.” – Azurescape

“[Brick] has a very versatile voice which is easy to listen to, bringing life to all the characters in his own special way…The dialogue is fast and furious, likewise the action, and it is a page-turner from start to finish. Space opera at its best…this audiobook is certainly recommended not just for its story but for the good quality reproduction of the narration. It’s new and exciting and it will surely be well received.” – SFCrowsnest.comPrevious Praise for Brian Herbert and Kevin J. Anderson “Herbert and Anderson create vivid characters—both human and machine—with passionate goals.”
—RT Book Reviews on Dune: The Battle of Corrin

“Filling in the gaps between the late Frank Herbert’s classic Dune and its sequels Dune Messiah and Children of Dune…this sequel to Paul of Dune is an important addition to the Dune chronology and will be in demand by Herbert fans.”
—Library Journal, starred review on The Winds of Dune

Brian Herbert, the son of Frank Herbert, is a multiple "New York Times "bestselling author in his own right. He is the winner of several literary honors and has been nominated for the Nebula award. His critically acclaimed science fiction novels include "Sidney's Comet, Sudanna Sudanna, The Race for God, " and "Man of Two Worlds" (written with Frank Herbert). Recently, he completed "Dreamer of Dune," a comprehensive biography of his illustrious father.Kevin J. Anderson has written twenty-nine national bestsellers and has been nominated for the Nebula Award, the Bram Stoker Award, and the SFX Reader's Choice Award. His critically acclaimed original novels include "Captain Nemo, Hopscotch, " and "Hidden Empire." He also set the Guiness world record for "Largest Single-Author Book Signing."Scott Brick first began narrating audiobooks in 2000, and after recording almost 400 titles in five years, "AudioFile" magazine named Brick a Golden Voice and "one of the fastest-rising stars in the audiobook galaxy." He has read a number of titles in Frank Herbert's bestselling "Dune" series, and he won the 2003 Science Fiction Audie Award for "Dune: The Butlerian Jihad." Brick has narrated for many popular authors, including Michael Pollan, Joseph Finder, Tom Clancy, and Ayn Rand. He has also won over 40 "AudioFile" Earphones Awards and the "AudioFile" award for Best Voice in Mystery and Suspense 2011. In 2007, Brick was named "Publishers Weekly"'s Narrator of the Year.
Loading...
or
Not Currently Available for Direct Purchase