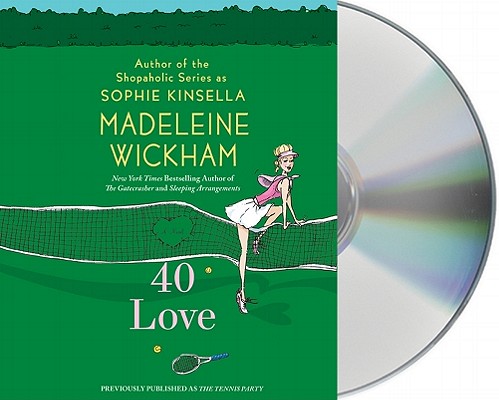 Everyone wins this game of literary tennis, a comedy of manners about envy in which Wickham skewers the nouveau riche. At their country estate, Patrick Chance and his wife host a weekend tennis party. As four couples gather on the sunny terrace, it seems obvious who among them is succeeding, and who is falling behind. But by the end of the party, nothing will be quite as certain. While the couples' children amuse themselves with pony rides and rehearsals for a play, the adults suffer a series of personal revelations and crises. Wickham's nonstop action reveals at every turn that matters may not be as they seem, and in the end one thing is crystal clear: the weekend is about anything but tennis.

Madeleine Wickham is the author of several acclaimed novels, including "A Desirable Residence," "Cocktails for Three," "Sleeping Arrangements" and "The Wedding Girl." As Sophie Kinsella, she has written a number of bestsellers including the Shopaholic series, "Twenties Girl," "Remember Me?, " "The Undomestic Goddess," and "Can You Keep a Secret?" "Confessions of a Shopaholic" was made into a major motion picture starring Isla Fisher and Hugh Dancy. Born in London, Wickham studied at New College, Oxford. She lives in London with her husband and family.Katherine Kellgren has recorded over 200 audiobooks and won four Audie Awards, three ALA Odyssey Honors, and eight "AudioFile" Earphones Awards. In 2011, Kellgren was named the Best Voice in Young Adult & Fantasy, and she won the Audie award for Best Female Narrator in both 2013 and 2014. Kellgren has also appeared onstage in London, New York and Frankfurt. She has recorded numerous plays and dramatizations of novels for the radio, including winners of the Peabody Award. She is a graduate of The London Academy of Music and Dramatic Art. In naming Kellgren a "Golden Voice," "AudioFile" magazine noted that she is a "marvel with accents...she is definitely a narrator to keep an ear out for." She lives in New York City.

“First published as The Tennis Party in the 1990s, this breezy work skewers the moneyed set with dark, delicious humor’ – The Star_Telegram

“For pure entertainment, consider the audio book, 40 Love, by Madeleine Wickham. This New York Times bestselling author sets her fictional story around a tennis weekend at a couple’s country home in England. Drama unfolds around the characters on and off the court, and it makes car time go quickly.” – Times of Trenton

“[Katherine Kellgren] gave a nuanced performance that gave everyone in the group of characters a very distinct identity. Because of this, I’m pretty certain that I enjoyed listening to it far more than I would have enjoyed reading it.” – 5 Minutes for Books

“I don’t think I would have enjoyed this book near as much in written form…[Katherine Kellgren’s] accents are spot on, reflecting ever character’s personality and nuances. Each character sprang to life and immediately formed a picture in my mind. Her intonation and inflection give the story life and verve. It is such a treat to listen to her narrate.” – A Bookworm’s World

“Katherine Kellgren does an excellent job of narrating this book – she changes her inflection just enough with each character so that the listener can differentiate them. I just love a British accent so I found her easy to listen to. If you are looking for a lighthearted, amusing listen, 40 Love is for you!” – Books in the City