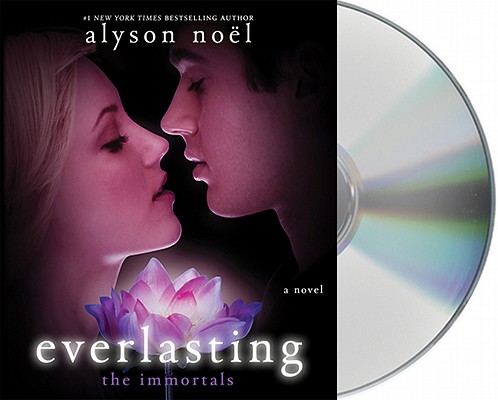 "Their epic love story has captured the hearts of millions and enchanted readers across the world. "Everlasting "is the beautiful finale to Alyson ""Noel's ""bestselling Immortals series, in which their journey draws to a spectacular conclusion where all will be revealed."

Their darkest enemies now defeated, Damen and Ever are free to embark upon their final quest to free Damen from the poison lingering in his body. If they can just find the antidote, they'll finally be able to feel each other's touch and experience the passionate night they've been longing for. But their fight to be together will lead them into the most formidable terrain yet into the dark heart of Summerland.
Here in a land of scorched earth and endless rain, Ever and Damen will discover their relationship's hidden origins, expose a secret history they never imagined and come face to face with the "true" reason fate keeps tearing them apart. Only then, when the final mystery is unraveled and the last secret revealed, Ever and Damen's future will hinge on one ultimate decision that will put everything at stake .even eternity.

“A passionate and powerful story of love that transcends lifetimes, Everlasting will prove a popular choice for public library audiobooks collections.” – The Midwest Book Review

Praise for the Immortals series

"Night Star jumps right into high action and never slows down, not even after the last page. Noel's writing is intense and vivid, pulling readers into the depths of her imagination."—Teen Reads "The true magic of the story is not so much in the plot and the amazing characters within it. These novels leave the reader feeling refreshed and like they learned something. Without being preachy, without sounding like a self-help book, Noël touches on the acceptance of death, the dangers of anger, and, once again, the power of positive thinking and . . . the message comes through loud and clear—it’s all about acceptance and facing life in a positive way. If you haven’t bought this yet, go get it right away!"—Examiner.com

“Noel’s novel is absolutely amazing! Fans of her Immortals series will not be disappointed—Ever and Damen’s love is challenged like never before, and the story ends with a big, satisfying twist that will have readers begging for more. This long awaited installment is incredible.”—Romantic Times (Top Pick)

“It is the mark of a daring writer to defy expectations and Alyson Noel does that to the power of ten in Blue Moon.  I guarantee you will have no idea what’s coming in the second book of the series while Alyson Noel surprises you with a big, fat twist and leaves you wanting more, more, more.”—The Book Chick

“A mesmerizing tale of teenage angst, love and sacrifice with plenty of crossover appeal…The startling but satisfying ending shows that Noël knows how to keep her audience hooked. Ever's supernatural struggles are a captivating metaphor for teenage fears about love, relationships and growing up.”—Publishers Weekly (Starred Review)

“Blue Moon was incredible. If you thought Evermore was full of suspense and unknowns, just wait until you read Blue Moon . . . The plot was insane, and I mean that in a good way. Noel took this novel in a direction I was never expecting, resulting in an emotional roller coaster ride that I never wanted to end. Fabulous.”—The Story Siren

“The YA paranormal genre has a flawless diamond among the gems with Blue Moon. I was moved to tears by a couple of scenes, especially near the end. Ms. Noel doesn’t back away from emotion, instead she has the ability to reach into your chest and twist your heart.”—Night Owl Romance

“One of the best books I've read this year . . . With immortal lovers, trustworthy friends, betraying fortune tellers, and freaky identical twins, what more could you ask for? Blue Moon has me begging for Shadowland!  I can't wait for the next in the series.”—The YA Book Blogger

"The Immortals Series is so unique; it’s like a breath of fresh air…Noel knows how to pull you into her world with beautiful imagery and mesmerizing words. Blue Moon is a page turner that will keep you reading until the last page. Just when you think you have the plot figured out, Alyson throws in another twist making it impossible to put this book down.” –5 stars! Fantastic Book Reviews

“Evermore will thrill many teen fantasy-suspense readers, especially fans of Stephenie Meyer’s Twilight series … Noël creates a cast of recognizably diverse teens in a realistic high-school setting, along with just the right tension to make Ever’s discovery of her own immortality—should she choose it—exciting and credible.”  --Booklist

“When I got a copy of Evermore, I sat down to read it, intending to only read a chapter or two. Instead, I blazed through the first hundred pages before I knew it…and then I didn’t want to put the book down. Except I couldn’t keep my eyes open any longer. So I picked it up the next morning and finished it. Now I can’t wait till July for the second book to see what happens next.” –Blog Critics Magazine

“Get ready for a wild ride that is filled with twisting paths and mystery, love and fantasy. . . The writing style, story, and characters are a bit like Meyer and Marr's popular books, but written with a new twist and voice. And after reading the book, you too will probably want your own Damen, even if it means making the ultimate sacrifice.”  --5/5 stars! The Book Queen

"I found myself unwilling to put the book down, even though I had to at some points, because I wanted to know what was going to happen…Ever was so real and her emotions were so believable that it was a little creepy. It's like Alyson Noël is actually a grieving, lovestruck teenager. She got Ever completely perfect. And by perfect, I mean delightfully flawed and deep.” --The Frenetic Reader

"Evermore is a wonderful book that I believe would be a lovely addition to any library . . .Definitely a book that fans of Stephenie Meyer and Melissa Marr should add to their collections. Definitely engaging and will catch your attention the minute you open to the first page!" - Mind of a Bibliophile

“Alyson Noël creates a great picture of each and every character in the book. I am a fan of the Twlight series and I recommend this book to those who like the series as well. It is a very quick read, with all the interesting twist and turns.” –Flamingnet Book Reviews

"I loved this book. It really keeps your attention though out the story, because the puzzle gets pieced together bit by bit, but you don't know exactly what happened until the end. The only thing that disappoints me is that the second book won't be published for a while. I would definitely recommend this to my friends." --Portsmouth Teen Book Review

"This is the first installment of The Immortals series. Ms. Noël pens a well-detailed story that makes it easy for the reader to visualize both the characters and the world around them. Evermore has a familiar theme that attracts readers, but inside this book you’ll find that the author has added some unique details that sets it apart." --Darque Reviews

“Evermore’s suspense, eerie mystery, and strange magic were interestingly entertaining…I found Ever to be a character I could really respect…Recommended.” –The Bookworm

“Evermore was a great way to lighten my reading load this winter and provided me with a creative, magical story that I really enjoyed. This is the first in a series for Noël and I think she may have a hit on her hands . . . Evermore has good and evil, likable characters, vivid descriptions and a good story.”- Planet Books

“I fell into it easily, and loved the world Noël created . . . The fact that Ever had psychic powers was truly interesting. They flowed neatly through the book and I felt Ever's pain. .trust me, this book was really good. I couldn't put it down. Alyson Noël created an amazing new world, and after this book I am so curious to see where it heads because honestly, I have no idea.” – Reading Keeps You Sane

“Ever is an easy character to like. I really felt for her because of all she lost and what she struggled with daily…Evermore was a really fast, engaging read with some great characters. It is the first in a series, so I'm eager to see if we will learn more about Ever, Damen and friends in the next one…it's sure to be a great read.”- Ninja Reviews

“The writing here is clear, the story well-defined and narrator Ever has an engaging voice that teens should enjoy."- January Magazine

"Alyson Noël created a well-detailed story that makes it easy for the reader to visualize both the characters and the world around them. Evermore has a familiar theme that attracts readers, but inside this book you’ll find that the author has added some unique details that sets it apart and will surprise you."- The Ravenous Reader

“I totally LOVE Alyson Noël’s Evermore…Noël has delivered a deliciously fresh new series that will be the next new thing that has every teen and even adults everywhere hooked and waiting for more…This is a keeper and a book that you have to go out and buy right now because if you don’t you will be missing out.  People will be asking if you have been living under a rock if you don’t give Evermore a try, and that is just not acceptable.” –Talk About My Favorite Authors

Alyson Noel is the #1 "New York Times" bestselling, award-winning author of the Immortals series, including "Evermore, Blue Moon, Shadowland, Dark Flame" and "Night Star," as well as the Immortals spin-off series beginning with "Radiance." She is also the author of "Faking 19, Art Geeks and Prom Queens, Laguna Cove, Fly Me to the Moon, Kiss & Blog, Saving Zoe," and "Cruel Summer." With over 2 million copies in print in the US alone, her books have been published in 35 countries and have won awards including the National Reader's Choice Award, NYLA Book of Winter Award, NYPL Stuff for the Teenage, TeenReads Best Books of 2007, and Reviewer's Choice 2007 Top Ten, and have been chosen for the CBS Early Show's "Give the Gift of Reading" segment, and selected for Seventeen Magazine's "Hot List" and Beach Book Club Pick. She lives in Laguna Beach, California.Katie Schorr's audiobook credits include narrating the novels in Alyson Noel's bestselling "Immortals" series - "Evermore, Blue Moon, Shadowland," and "Dark Flame." Of her work on the series, "AudioFile" magazine has said, "Narrator Katie Schorr has a wonderfully raspy, youthful voice, which she puts to good effect on the cast of teenaged characters."Schorr's one-woman show, "Take Me. Seriously.," ran for six months at The Upright Citizens Brigade Theater, and she performs throughout New York in new works at The Ensemble Studio Theater and Ars Nova, among other theaters. She has appeared on VH1's "Best Week Ever" and co-stars in the web series "Head in the Oven" with Saturday Night Live actor Bill Hader. She is the co-creator of Yoga Partners: A Web Series."
Loading...
or
Not Currently Available for Direct Purchase