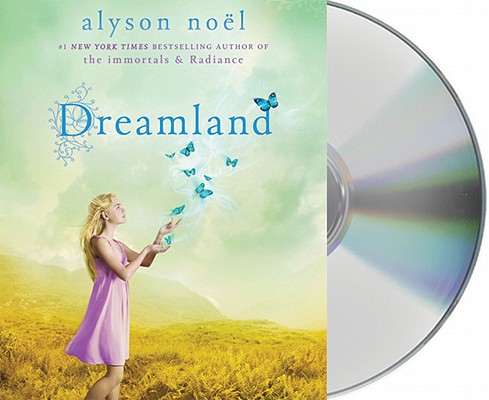 Riley's finding that the afterlife can be a lonely place when all you do is focus on work. So she goes to the place where dreams happen, hoping to find a way to contact her sister, Ever. She meets the director, who tells her about the two ways to send dreams. As a Dream Jumper, a person can jump into a dreamer's dream, share a message, and participate. As a Dreamweaver, an entire dream can be created in a studio and sent to the dreamer. But Dreamweaving was outlawed decades ago, and the studio was boarded up. Thinking it's her only way to reach out to her sister, Riley goes in search of the old studio. There she finds a ghost boy, who's been creating and sending nightmares to people for years. In order to stop him and reach out to Ever, Riley is going to have to confront and overcome her own fears.

“…Kathleen McInenery was great. Although her voice didn’t necessarily sound like that of a 12 year old, she nailed the intonation and emotion behind the words.” – YA LitWit Blog

“Although intended for young adults, Dreamland will appeal to listeners of all ages and is highly recommended for public library audiobook collections.” – The Midwest Book Review

“Kathleen McInerney’s narration is just killer. In earlier books, I had mostly read riley as being spunky and sassy, but the narrator really brings out her girly side, and her awe at all the magical things that surround her.” – All Consuming Books

Alyson Noel is the #1 "New York Times" bestselling, award-winning author of "Faking 19, Art Geeks and Prom Queens, Laguna Cove, Fly Me to the Moon, Kiss & Blog, Saving Zoe, Cruel Summer," and The Immortals series including "Evermore, Blue Moon, Shadowland, Dark Flame," and "Night Star," as well as the Immortals spin-off series beginning with "Radiance." With over 2 million copies in print in the US alone, her books have been published in 35 countries and have won awards including the National Reader's Choice Award, NYLA Book of Winter Award, NYPL Stuff for the Teenage, TeenReads Best Books of 2007, and Reviewer's Choice 2007 Top Ten, and have been chosen for the CBS Early Show's "Give the Gift of Reading" segment, and selected for "Seventeen" Magazine's "Hot List" and Beach Book Club Pick. She lives in Laguna Beach, California.Kathleen McInerney has narrated numerous audiobooks by bestselling authors such as Emily Giffin, Danielle Steel, Jeffrey Stepakoff, Mary Kay Andrews, and Linda Castillo. Her narration of "Just One Day" by Gayle Forman won an "AudioFile "Earphones Award. In reviewing Mary Kay Andrew's "Ladies' Night," "AudioFile" magazine said, "McInerney makes each of the characters distinct and recognizable and gives each the perfect voice, accent, and vocal mannerisms. Most enjoyable and well performed." She has appeared onstage in New York and around the United States in both classical and contemporary theater. Her credits also include television commercials, daytime drama, radio plays, and animation voice-overs."
Loading...
or
Not Currently Available for Direct Purchase