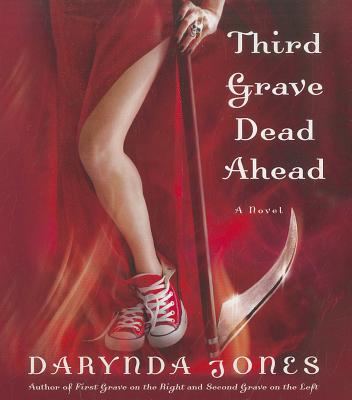 Third in the award-winning paranormal series that’s “hilarious and heartfelt, sexy and surprising.”
—J.R. Ward Paranormal private eye. Grim reaper extraordinaire. Whatever. Charley Davidson is back in Darynda Jones' Third Grave Dead Ahead! And she’s drinking copious amounts of caffeine to stay awake because, every time she closes her eyes, she sees him: Reyes Farrow, the parthuman, part-supermodel son of Satan. Yes, she did imprison him for all eternity, but come on. How is she supposed to solve a missing persons case, deal with an ego-driven doctor, calm her curmudgeonly dad, and take on a motorcycle gang hellbent on murder when the devil’s son just won’t give up?


Praise For Third Grave Dead Ahead…

“This witty listen is full of clever dialogue and memorable characters, all dished up with relish by a narrator who knows how to deliver.” – AudioFile Magazine

Winner of the 2009 Golden Heart(R) for Best Paranormal Romance, DARYNDA JONES lives in the Land of Enchantment, also known as New Mexico, with her husband and two sons.
Loading...
or
Not Currently Available for Direct Purchase