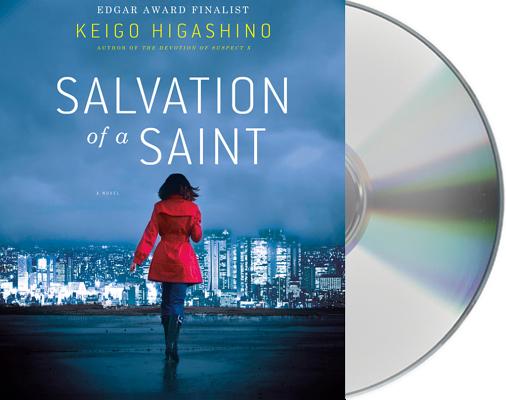 Salvation of a Saint

From the author of the internationally bestselling, award-winning "The Devotion of Suspect X" comes the latest novel featuring "Detective Galileo."

In 2011, "The Devotion of Suspect X" was a hit with critics and readers alike. The first major English language publication from the most popular bestselling writer in Japan, it was acclaimed as "stunning," "brilliant," and "ingenious." Now physics professor Manabu Yukawa Detective Galileo returns in a new case of impossible murder, where instincts clash with facts and theory with reality.

Yoshitaka, who was about to leave his marriage and his wife, is poisoned by arsenic-laced coffee and dies. His wife, Ayane, is the logical suspect except that she was hundreds of miles away when he was murdered. The lead detective, Tokyo Police Detective Kusanagi, is immediately smitten with her and refuses to believe that she could have had anything to do with the crime. His assistant, Kaoru Utsumi, however, is convinced Ayane is guilty. While Utsumi's instincts tell her one thing, the facts of the case are another matter. So she does what her boss has done for years when stymied she calls upon Professor Manabu Yukawa.

But even the brilliant mind of Dr. Yukawa has trouble with this one, and he must somehow find a way to solve an impossible murder and capture a very real, very deadly murderer.

"Salvation of a Saint" is Keigo Higashino at his mind-bending best, pitting emotion against fact in a beautifully plotted crime novel filled with twists and reverses that will astonish and surprise even the most attentive and jaded of listeners.


Praise For Salvation of a Saint…

“David Pittu, a stage-trained actor, uses a variety of textures, tones and tempos – and just the hint of a Japanese accent – to give each character a voice of his or her own.” – The New York Times Book Review

“On audio, the work is enhanced by the narration of David Pittu, who is one of the best performers with a broad range and a long list of accomplishments…He is superbly talented, thinking through each character’s voice and demeanor. He never trips over difficult Japanese words…The performance is without flaw.” – Reviewing the Evidence

“Pittu reads the mystery, using blunt and confident tones to portray Mashiba and more quavering emotional inflections for Mita…Give this to listeners who enjoyed Higashino’s The Devotion of Suspect X.” – Booklist

“David Pittu turns in a stellar reading, deftly transitioning between the principles and providing defining intonations for each. The plot is so intricate it will keep you guessing until the end.” – The Star-Ledger

KEIGO HIGASHINO is currently the bestselling author in Japan with over three dozen bestsellers, hundreds of millions of copies of his books sold worldwide, and nearly twenty films and television series based on his work. He won the Naoki Prize for his first novel featuring Detective Galileo and he lives in Tokyo, Japan. ALEXANDER O. SMITH has translated a wide variety of novels, manga, and video games, for which he has been nominated for the Eisner Award, and won the ALA's Batchelder Award. He studied at Dartmouth College and holds an M.A. in Classical Japanese from Harvard University. He lives in Vermont. DAVID PITTU is a two-time Tony nominee, and has narrated over 36 audiobooks, including Donna Tartt's "The Goldfinch," which earned an Audie for literary fiction and best male narrator. His other work includes "The Marriage Plot" by Jeffrey Eugenides and "An American Spy "by Olen Steinhauer. Pittu has also read for Rick Riordan, Ann Rice, and Keigo Higashino, among others.
Loading...
or
Not Currently Available for Direct Purchase