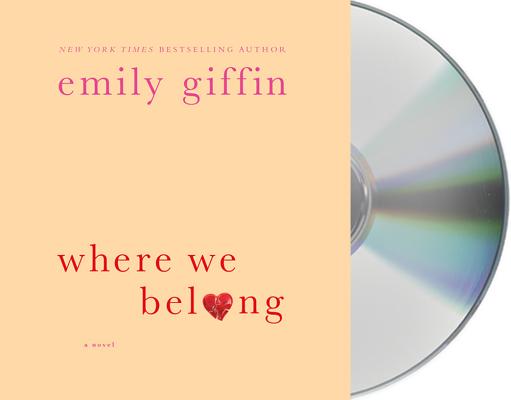 Where We Belong (Compact Disc)

The author of five blockbuster novels, Emily Giffin, delivers an unforgettable story of two women, the families that make them who they are, and the longing, loyalty and love that binds them together

Marian Caldwell is a thirty-six year old television producer, living her dream in New York City. With a fulfilling career and satisfying relationship, she has convinced everyone, including herself, that her life is just as she wants it to be. But one night, Marian answers a knock on the door . . . only to find Kirby Rose, an eighteen-year-old girl with a key to a past that Marian thought she had sealed off forever. From the moment Kirby appears on her doorstep, Marian's perfectly constructed world and her very identity will be shaken to its core, resurrecting ghosts and memories of a passionate young love affair that threaten everything that has come to define her.

For the precocious and determined Kirby, the encounter will spur a process of discovery that ushers her across the threshold of adulthood, forcing her to re-evaluate her family and future in a wise and bittersweet light. As the two women embark on a journey to find the one thing missing in their lives, each will come to recognize that where we belong is often where we least expect to find ourselves a place that we may have willed ourselves to forget, but that the heart remembers forever.

EMILY GIFFIN is the author of "Something Borrowed," her smash-hit debut novel that was made into a major motion picture. She is also the "New York Times" bestselling author of "Something Blue," "Baby Proof," "Love the One You're With," and "Heart of the Matter." Giffin is a graduate of Wake Forest University and the University of Virginia School of Law. After practicing litigation at a Manhattan firm for several years, she moved to London to write full time. She lives in Atlanta with her husband and children. ORLAGH CASSIDY is the winner of the 2009 Best Voice in Children & Family Listening and the 2008 and 2011 Best Voice in Mystery & Suspense. She's narrated for Jacqueline Winspear, James Patterson, Erica Spindler, Beth Harbison, and Frank Herbert, among others.

Praise For Where We Belong…

“WHERE WE BELONG had me riveted, in part because of the flawless reading by Orlagh Cassidy” – Winston-Salem Journal

“Narrator Orlagh Cassidy emphasizes the tenderness and emotion in Giffin’s portrayal of a mother and daughter who are getting to know each other. Cassidy makes it obvious when Marian is feeling guilty, nervous, or awkward and when Kirby is feeling upset, intrigued, or vulnerable. Cassidy credibly depicts just how difficult but necessary this mother-and-daughter relationship is for both characters.” – AudioFile Magazine

Praise for the print edition of WHERE WE BELONG:

"In another surefire hit, [Giffin] serves up pathos, humor, and one doozy of a twist." —Entertainment Weekly

"Sharply drawn characters and finely honed sensibility add up to a story that’s as bittersweet as an August evening." —Family Circle

"Book clubs will have a field day with this one. Thorny mother-daughter relationships and secrets we keep from loved ones burn up the pages." —USA Today

"After five charming relationship-themed hits, Emily Giffin had a lot to live up to with WHERE WE BELONG. Luckily, the author executes with a thoughtful finesse that makes this easily her best work yet. [WHERE WE BELONG] is that special type of story that takes priority over getting to bed on time. And the payoff is well worth it." —Boston Globe

"Emily Giffin ranks as a grand master. Over the course of five best-selling novels, she has traversed the slippery slopes of true love, lost love, marriage, motherhood, betrayal, forgiveness and redemption that have led her to be called ‘a modern-day Jane Austen.’ With Giffin’s use of humor, honesty, originality and, like Austen, a biting social commentary, this modern-day ‘woman’s novel’ sits easily on nightstands and in beach bags. Even Austen would find it hard to put down." —Chicago Sun-Times "Emily Giffin’s new novel about the legacy of adoption, WHERE WE BELONG, imagines what happens when an 18-year-old girl tracks down her birth mother…the latest in a string of provocative, imaginative novels that began in 2004 with SOMETHING BORROWED. All the characters [here] are on a journey to find ‘where we belong,’ and Giffin knits together their journeys with a masterly hand." —Seattle Times "Emily Giffin’s WHERE WE BELONG is a literary Rorschach test. The book, while thoroughly entertaining, will also prod readers to examine choices they’ve made in their lives. It will compel them to muse about things they’d like to do over, to do differently, to do better…[and] gracefully examines themes of identity, family and forgiveness." —Miami Herald

"Emily Giffin has a wonderful way with words. [WHERE WE BELONG] is an emotionally powerful story that will ring true with women who have given a child away and with those who grew up wondering where they came from. Giffin may be working with a premise and plot that is fairly simple, but there’s nothing lightweight about the emotional turbulence she creates." —Ft. Worth Star-Telegram

"[Giffin] shows that real love is messy but meaningful in this delicious, easygoing read." —American Way "[Giffin’s] novels present tough moral dilemmas all related to love. And her latest, WHERE WE BELONG, is no exception and perhaps her best yet…It’s a classic Giffin tale, nuanced and messy and utterly addictive, with fully fleshed-out characters who face morally ambiguous choices that aren’t resolved in neat bows." —Austin American-Statesman

"Emily Giffin is back with another must-read summer novel!" —Harper’s Bazaar

"The next must-read book of the summer!" —Star "WHERE WE BELONG is too suspenseful to be called chick lit and too relationship-centered to be labeled a thriller. But most readers will have little time to think of a genre for Emily Giffin’s latest novel as they race through this gripping story about the reunion of a high school senior and the woman who put her up for adoption 18 years earlier." —Connecticut Post

"Giffin has a way of tugging on our heartstrings while still making us laugh out loud...[a] perfect recipe." —Woman’s World

"Graceful and inviting prose, careful plotting and vivid characterizations…The coming together of two people who share a genetic heritage and little else is dramatically and emotionally risky. But Giffin makes the most of the opportunity, and WHERE WE BELONG had me riveted." —Winston-Salem Journal "The issue about secrets isn’t about keeping them. It’s the reveal and its consequences. That’s the challenge faced by the characters in Emily Giffin’s new, briskly paced…WHERE WE BELONG. Taking a somewhat more somber tone than she did in her [previous] bestselling novels, Giffin’s approach and style mature in this latest effort." —Philadelphia Inquirer "Breezy and fun, this is definitely one for the beach bag!" —All You magazine "Giffin’s latest will make you shed a few tears – and call your mom." —Ladies Home Journal "You’re sure to spy lots of pale-orange book covers at the beach this summer, as Emily Giffin releases her latest in a series of successful reads. The book has heart, meat and realistic characters." —am New York

"[WHERE WE BELONG] delivers the readable, addicting prose we have all come to love [but] delves deeper than ever before, showing that the author is capable of making her signature style work with topics beyond typical relationships. Through Marian, her daughter and the rest of those affected by Marian’s decisions, the author beautifully tackles the complex issues of sex, abortion, adoption and the difficult decisions that go along with each." —Woodbury magazine"A satisfying and entertaining read. Giffin is a gifted storyteller [and] writes smart, snappy prose that elevates this novel." —Vancouver Sun

"Believable characters, [a] page-turning plot and [an] unblinking look at the choices we make as women." —WeightWatchers magazine