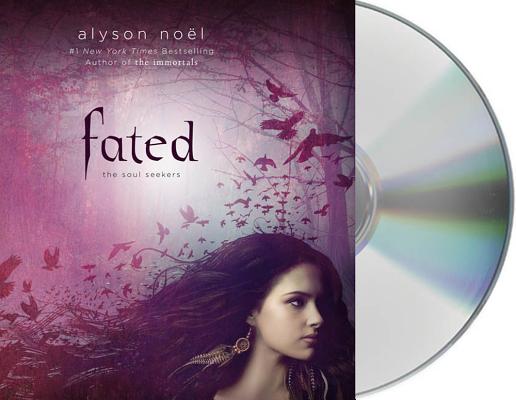 "From the #1 New York Times bestselling author of The Immortals, Alyson Noel, comes Fated" "a breathtaking new saga brimming with magic, mystery, and an intoxicating love story that will steal your heart away. Meet The Soul Seekers."

Strange things are happening to Daire Santos. Crows mock her, glowing people stalk her, time stops without warning, and a beautiful boy with unearthly blue eyes haunts all her dreams. Fearing for her daughter's sanity, Daire's mother sends her to live with the grandmother she's never met. A woman who recognizes the visions for what they truly are the call to her destiny as a Soul Seeker one who can navigate the worlds between the living and dead.

There on the dusty plains of Enchantment, New Mexico, Daire sets out to harness her mystical powers. But it's when she meets Dace, the boy from her dreams, that her whole world is shaken to its core. Now Daire is forced to discover if Dace is the one guy she's meant to be with...or if he's allied with the enemy she's destined to destroy.

"Alyson Noël paints a magical New Mexican landscape." –New Mexico Style "Noël does a terrific job of slowly unspooling secrets and motivations with writing that is both charismatic and spunky." –LA Times "A rush of romance will sweep you away in this hauntingly mystical read. I'm already as addicted to Daire and Dace as I was to Ever and Damen. Next book please!" –Janet, teen reader from Kentucky for Justine magazine "An adventurous page-turner. Dreams and reality bleed into each other in this dangerous and edgy romance. Another home run series for Alyson Noël!" –Anna, teen reader from NY for Justine magazine "Emotional, fast-paced, romantic. I love Alyson Noël’s lushly descriptive writing –I could hear the beating of the crow’s wings, feel the blue-eyed boy’s embrace and smell Paloma’s coffee in this new Soul Seekers series." –Catherine, teen reader from Florida for Justine magazine "With fantastic characters and an amazing plot, Fated will suck you in and leave you breathless. Noël is a master with words…with passion and thrills around each corner, this book is a must read." – Romantic Times (Top Pick!) "Atmospheric and enjoyable...Noël's many fans will be eager to find out what happens next." –Publishers Weekly "Readers will feel the pull of Daire's quest just as forcefully as Daire herself does, and will count the days until the release of Echo." –Shelf Awareness, Maximum Shelf "A fast and enjoyable read...with some very unique plot twists and balance among the romance, conflict and family relationships." --Deseret News "Two boys, one light and one dark, factor heavily into the intriguing, twisting story line, which is sure to draw Noël’s numerous fans." –Booklist "Another captivating series from Alyson Noël. Fated did an excellent job setting up everything for the next books in the series. …I’m really looking forward to seeing where this series goes!" –The Story Siren "Fated reads very well and the descriptions set the scene perfectly. Noel takes the time to set the story up right so it never feels rushed or that any details were missing. …I’m glad there’s not too long to wait for the sequel – Echo is due out in November of this year."—The Reading Date "If you're looking for a new series to get stuck into "The Soul Seekers" is out of this world." –Dark Readers  "I found myself unable to put this book down, completely captivated by the narration and the beautifully crafted world. It was a refreshing YA fantasy with new elements I’ve never before." –Love, Literature, Art and Reason "A superb thriller. The key to this absorbing tale is the heroine who makes the Noël mythos seem genuine as she enters the underworld while wondering who she can trust. Filled with twists, this is a winning opening act." – Alternative Worlds "This book has it all—magick, spookiness, cute boys, a little romance, danger, fun and light-hearted moments, some mystery, and there's even good/evil twins (cute ones, too!) What more can you ask for? I am very intrigued by this new world that Alyson has created, and I cannot wait to read more about Daire and her friends in the future." –Once Upon A Twilight "Noël has surpassed all of my exceptions with a new world filled with magick, trust, and love. . . . It just mesmerizes me how [she] can create a world filled with fast-pacing, heart-breaking plots along with awesome characters and such a magical world."—Cover Analysis "I loved this book. All the characters were beautifully developed including some of the minor characters. . . I for one had high expectations of this book because of Evermore and Fated defiantly met those standards." —Flamingnet "The world-building in Fated is fantastic. …The plot is amazing and the rich Native American history along with the supernatural elements of the book, just made it even better...Fated is a story of pure magic—breathtaking and wonderful, all at once."  —Kindle & Me "Fated was absolutely original in its own way! From the vivid descriptions to the spiritual world the author, Alyson Noël, has cleverly created, I was so intrigued and stunned by this book that I can't wait to see where Noël takes this series to because she sure as hell has a winner right here!" —Tales of the Inner Book Fanatic "This novel is something different than anything I've encountered. Fated has a rich mythology, full of spirit animals, spirit journeys, fate, soul-seeking, and of course, good and evil." —Thirteen Days Later

ALYSON NOEL is the #1 New York Times bestselling author of the Immortals series, the Riley Bloom series, and seven previous novels for St. Martin's Press. She lives in Laguna Beach, California, where she is at work on her next book.

Brittany Pressley is an audiobook narrator, songwriter, and vocal producer in New York City. She has narrated several audiobooks, including works by Alyson Noel and R. L. Stine. Her notable screen credits include being a newscaster on FOX Kid's News and playing Courtney in the Fox Television Network series "Swans Crossing." She has also done both regional and national commercial spots and PSAs for TV and Radio, including MasterCard, Nickelodeon, and MTV."
Loading...
or
Not Currently Available for Direct Purchase