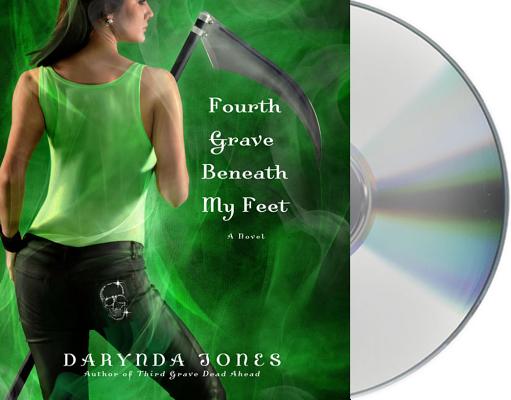 The fourth in Darynda Jones' fun and sexy New York Times bestselling paranormal series: "If you enjoy Evanovich's Stephanie Plum, you will certainly enjoy Charley Davidson!" —Suspense Magazine
Sometimes being the grim reaper really is that. Grim. And since Charley's last case went so awry, she has taken a couple months off to wallow in the wonders of self-pity. But when a woman shows up on her doorstep convinced someone is trying to kill her, Charley has to force herself to rise above. Or at least get dressed. She quickly realizes something is amiss when everyone the woman knows swears she's insane. The more they refute the woman's story, the more Charley believes it.
In the meantime, the sexy, sultry son of Satan, Reyes Farrow, has been cleared of all charges. He is out of prison and out of Charley's life, as per her wishes and several perfectly timed death threats. But his absence has put a serious crimp in her sex life. While there are other things to consider, like the fact that the city of Albuquerque has been taken hostage by an arsonist, Charley is having a difficult time staying away. Especially when it looks like Reyes may be involved.

In Fourth Grave Beneath My Feet, just when life was returning to normal, Charley is thrust back into the world of crime, punishment, and the devil in blue jeans.

“Narrator Lorelei King is excellent as the voice of Charley and equally adept at portraying all the characters.” —Library Journal

“Lorelei King brings everyone's favorite Grim Reaper back to snarky life in this fourth addition to Darynda Jones's engrossing series…King is in her element voicing Charley and manages to make her every pun and sarcastic retort crackle with life while exploring the emotional nuances of her troubled relationships and romances.” —AudioFile Magazine