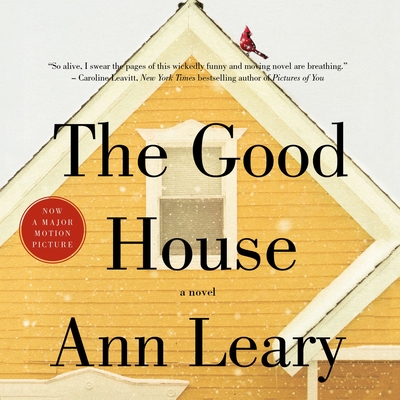 "Fresh, sharp and masterfully told, Hildy's tale is as intoxicating as it is sobering."—People magazine

A riveting novel in which an engaging and wildly irreverent woman is in complete denial—about herself, her drinking, and her love for a man she's known all her life

Ann Leary's The Good House tells the story of Hildy Good, who lives in a small town on Boston's North Shore. Hildy is a successful real-estate broker, good neighbor, mother, and grandmother. She's also a raging alcoholic. Hildy's family held an intervention for her about a year before this story takes place—"if they invite you over for dinner, and it's not a major holiday," she advises "run for your life"—and now she feels lonely and unjustly persecuted. She has also fooled herself into thinking that moderation is the key to her drinking problem.
As if battling her demons wasn't enough to keep her busy, Hildy soon finds herself embroiled in the underbelly of her New England town, a craggy little place that harbors secrets. There's a scandal, some mysticism, babies, old houses, drinking, and desire—and a love story between two craggy sixty-somethings that's as real and sexy as you get. An exceptional novel that is at turns hilarious and sobering, The Good House asks the question: What will it take to keep Hildy Good from drinking? For good.


Praise For The Good House: A Novel…

“Both Hildy's denial and her vulnerability are dramatized extremely well by narrator Mary Beth Hurt. Hurt deftly portrays Hildy's tendency to hide her alcoholism under a veneer of polished perfection; she's a woman who can deal with anyone's problems but her own. As the novel continues, the listener feels the pain of Hildy's breakdown and relapse in Hurt's Delivery, so well does she depict Leary's beautifully plotted story.” —AudioFile Magazine, Earphones Award winner

“Mary Beth Hurt's reading brought out the humor in Leary's prose…Hurt's reading was a very engaging way to absorb this novel.” —National Association of Realtors

“The Good House is told in first person, which makes it an ideal audiobook – especially in the hands of reader Mary Beth Hurt, who simultaneously portrays Hildy as smart, funny, prickly, sympathetic and – well, pathetic.” —The Star-Ledger

“Hildy is brought to life – on and off the wagon – by Mary Beth Hurt's fabulous performance.” —Bookpage

“I was constantly entertained by the story and Hurt's total inhabitation of Hildy, who is both star and narrator of her own tale” —Winston-Salem Journal

“Mary Beth Hurt does a fantastic job bringing Hildy to life vocally in all her facets…The author is talented and the reader adept; they have created a comprehensively compelling audio experience.” —New World Review

An actress of stage and screen, Mary Beth Hurt began her Broadway career with Crimes of the Heart. She then went on to make her film debut in Woody Allen’s Interiors. Other movie credits include The World According to Garp, The Age of Innocence, The Exorcism of Emily Rose, and Young Adult. Hurt was also a recurring character in the television series Law & Order for thirteen years.
Loading...
or
Not Currently Available for Direct Purchase