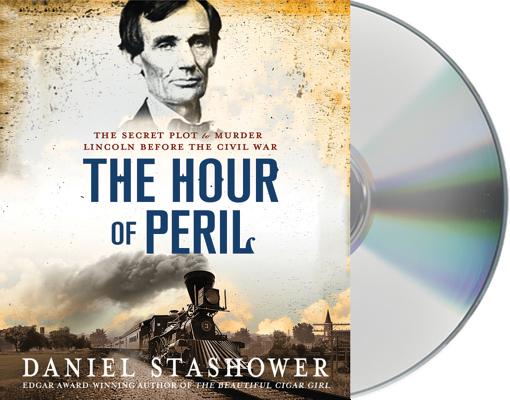 The Hour of Peril

The Secret Plot to Murder Lincoln Before the Civil War

"It's history that reads like a race-against-the-clock thriller." —Harlan Coben

Daniel Stashower, the two-time Edgar award–winning author of The Beautiful Cigar Girl, uncovers the riveting true story of the "Baltimore Plot," an audacious conspiracy to assassinate Abraham Lincoln on the eve of the Civil War.

In February of 1861, just days before he assumed the presidency, Abraham Lincoln faced a "clear and fully-matured" threat of assassination as he traveled by train from Springfield to Washington for his inauguration. Over a period of thirteen days the legendary detective Allan Pinkerton worked feverishly to detect and thwart the plot, assisted by a captivating young widow named Kate Warne, America's first female private eye.

As Lincoln's train rolled inexorably toward "the seat of danger," Pinkerton struggled to unravel the ever-changing details of the murder plot, even as he contended with the intractability of Lincoln and his advisors, who refused to believe that the danger was real. With time running out Pinkerton took a desperate gamble, staking Lincoln's life—and the future of the nation—on a "perilous feint" that seemed to offer the only chance that Lincoln would survive to become president. Shrouded in secrecy—and, later, mired in controversy—the story of the "Baltimore Plot" is one of the great untold tales of the Civil War era, and with The Hour of Peril Stashower has crafted a spellbinding historical narrative with the pace and urgency of a race-against-the-clock thriller.
A Washington Post Notable Nonfiction Book of 2013

Winner of the 2014 Edgar Award for Best Fact Crime


Praise For The Hour of Peril: The Secret Plot to Murder Lincoln Before the Civil War…

“Lively writing and lively reading make The Hour of Peril worth hearing…Narrator Edoardo Ballerini's performance fits well with the author's thriller-style approach to the story. Ballerini does an excellent job of using inflection to differentiate between Stashower's writing and quotes from other documents, such as books and newspapers.” —Audiofile Magazine

“Nicely read by Edoardo Ballerini, both story and voice steadily build to a suspenseful denouement.” —The Star-Ledger

“[Ballerini] keeps a light foot on the pedal, skillfully maintaining a quick pace and a sustainable level of suspense…This historical account surprises at every turn, and Ballerini's fine reading maintains listener interest in a well-researched book.” —Booklist

DANIEL STASHOWER is an acclaimed biographer and narrative historian and winner of the Edgar, Agatha, and Anthony awards, and the Raymond Chandler Fulbright Fellowship in Detective Fiction. His work has appeared in The New York Times, The Washington Post, Smithsonian Magazine, AARP: The Magazine, and National Geographic Traveler as well as other publications. His books include The Hour of Peril, Teller of Tales, and The Beautiful Cigar Girl.

Edoardo Ballerini is an American writer, director, film producer and actor.  He has won many awards for his audiobook narration; within only a few years after beginning his narrating career, he won several AudioFile Earphones Awards for his work, including Stephen Greenblatt’s The Swerve: How The World Became Modern, Jodi Picoult’s The Storyteller and Jess Walter’s Beautiful Ruins.   He narrated Kenzaburo Oe’s Nobel Prize Winning Nip the Buds, Shoot the Kids, Joseph Finder’s The Moscow Club as well as works by John Edward and Daniel Stashower.   In television and film, he is best known for his role in The Sopranos, 24, I Shot Andy Warhol, Dinner Rush and Romeo Must Die. The silky-voiced Ballerini is trained in theater and continues to do much work on stage.
Loading...
or
Not Currently Available for Direct Purchase