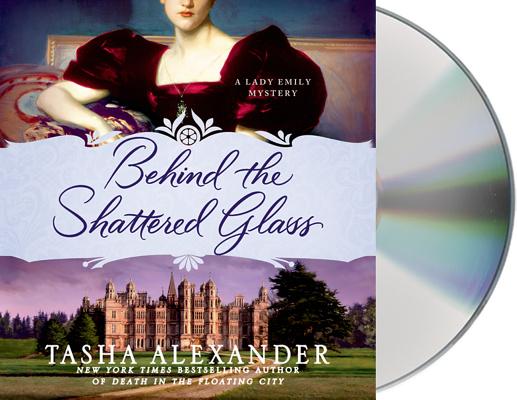 Behind the Shattered Glass

A ruined abbey on a beautiful estate in Derbyshire, a murdered peer, and a most unlikely romance make New York Times bestseller Tasha Alexander's new novel Behind the Shattered Glass absolutely irresistible

Anglemore Park is the ancestral home of Lady Emily Hargreave's husband Colin. But the stately calm of country life is destroyed when their neighbor, the Marquess of Montagu, bursts through the French doors from the garden and falls down dead in front of the shocked gathering. But who has a motive for murdering the young aristocrat? The lovely cousin who was threatened by his engagement, the Oxford friend he falsely accused of cheating, the scheming vicar's daughter he shamelessly seduced or the relative no one knew existed who appears to claim the Montagu title? Who is the mysterious woman seen walking with him moments before he was brutally attacked?
The trail takes listeners into the gilded world of a British manor house and below stairs to the servants who know all the secrets. One family's hidden past and a forbidden passion are the clues to a puzzle only Lady Emily can solve.

“Author Tasha Alexander is one to watch--and read. . . . despite her cliffhanger climaxes and witty repartee, there's a depth of sensitivity which sets her apart.” —The Huffington Post on Dangerous to Know

“With wisps of darkness, shadows of a ghost story and embers of heightened Freudian themes, Dangerous to Know is the perfect novel to curl up with and chase away the world.” —Examiner.com

“Infused with wit and charm, with just the right amounts of danger, romance and detection blended in.” —Denver Post on Tears of Pearl

“Alexander excels in depicting the social mores of a society uncomfortable with the independence of women, and deftly allows the plot to develop in tandem with Emily's growth.” —The Baltimore Sun on And Only to Deceive

Tasha Alexander is the author of the New York Times bestselling Lady Emily mystery series (Tears of Pearl, Dangerous to Know, and A Crimson Warning). The daughter of two philosophy professors, she studied English Literature and Medieval History at the University of Notre Dame. She and her husband, novelist Andrew Grant, live on a ranch in southeastern Wyoming.
Loading...
or
Not Currently Available for Direct Purchase