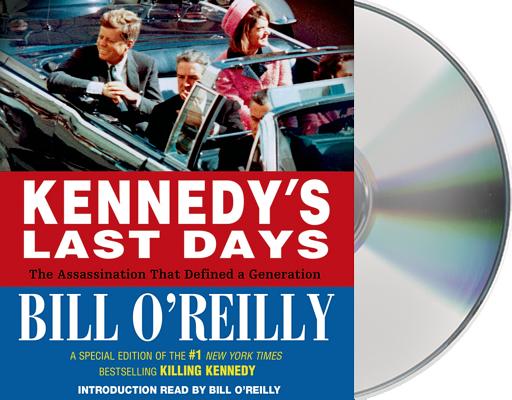 On a sunny day in Dallas, Texas, at the end of a campaign trip, President John Fitzgerald Kennedy is assassinated by an angry, lonely drifter named Lee Harvey Oswald. The former Marine Corps sharpshooter escapes briefly, but is hunted down, captured, and then shot dead while in police custody.

Kennedy's Last Days is a gripping account of the events leading up to the most notorious crime of the twentieth century. Author Bill O'Reilly vividly describes the Kennedy family's life in the public eye, the crises facing the president around the world and at home, the nation's growing fascination with their vigorous, youthful president, and finally, the shocking events leading up to his demise.

Adapted from Bill O'Reilly's best-selling historical thriller Killing Kennedy, with an unforgettable cast of characters, page-turning action, and art on every spread, Kennedy's Last Days is history that reads like a thriller. This exciting book will captivate adults and young readers alike.

Bill O'Reilly is a trailblazing TV journalist who has experienced unprecedented success on cable news and in writing thirteen national number-one bestselling nonfiction books. There are currently more than 17 million books in the Killing series in print. He lives in Long Island.

Edward Herrmann's many television credits include his Emmy-nominated portrayals of Franklin D. Roosevelt and his guest role in The Practice, for which he won an Emmy.  He has also played the part of Richard Gilmore on the popular television series Gilmore Girls and appeared in Grey's Anatomy, 30 Rock, and Law & Order.  On stage, Edward has appeared on Broadway, most notably as Frank Gardner in Mrs. Warren's Profession, for which he won a Tony Award.  His film work includes roles in The Great Waldo Pepper, The Paper Chase, Overboard,The North Avenue Irregulars, and Woody Allen's The Purple Rose of Cairo. Edward has narrated over 300 titles, including Thurston Clarke's Ask Not, published by Macmillan Audio.  AudioFile magazine has deemed Edward a "Golden Voice," and he has received multiple awards and nominations for AudioFile's Earphones Awards and Audie Awards.
Loading...
or
Not Currently Available for Direct Purchase