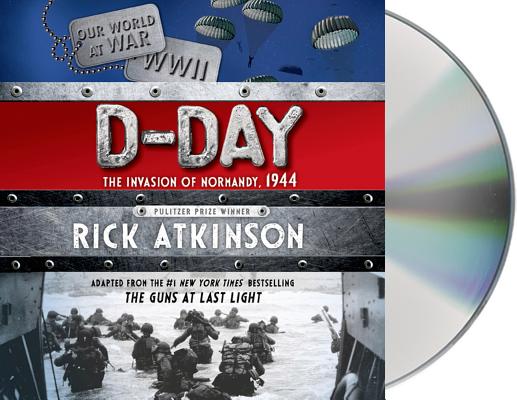 
Praise For D-Day: The Invasion of Normandy, 1944 [The Young Readers Adaptation]…

“Adapted from Atkinson's adult history of the latter part of WWII, The Guns at Last Light (2013), this is a brisk, busy, gutsy look at modern warfare's most famous offensive.” —Booklist

“This fine adaptation of Atkinson's adult The Guns at Last Light is a readable, and even suspenseful, account of the final preparations for and successful execution of the D-Day invasion.” —School Library Journal, STARRED REVIEW

“This version of the much-admired The Guns at Last Light for younger audiences focuses on the drama and the astonishing scale of one of World War II's pivotal operations: the D-Day invasion . . . A grand and significant tale told with dash and authority.” —Kirkus Reviews

“A magnificent book . . . Though the story may seem familiar, I found surprising detail on every page . . . Atkinson's account of D-Day is both masterly and lyrical . . . [He] is an absolute master of his material.” —Max Hastings, The Wall Street Journal

“A tapestry of fabulous richness and complexity . . . Atkinson is a master of what might be called ‘pointillism history,' assembling the small dots of pure color into a vivid, tumbling narrative. . . . The Liberation Trilogy is a monumental achievement . . . densely researched but supremely readable.” —The New York Times Book Review

“Breathtaking, unforgettable . . . Atkinson provides us with especially poignant descriptions in a blaze of writing and research that matches the drama and significance of the moment, all without peer in modern history . . . This volume is a literary triumph worthy of the military triumph it explores and explains.” —The Boston Globe