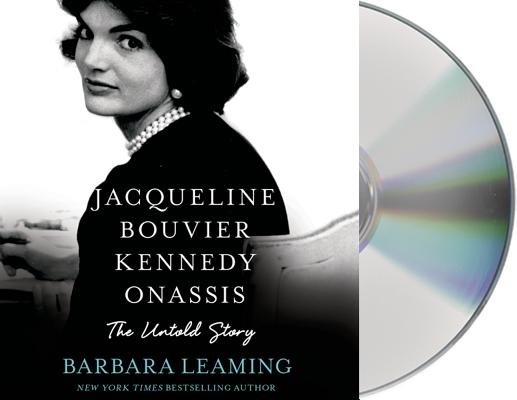 The untold story of how one woman's life was changed forever in a matter of seconds by a horrific trauma.

Here is the woman as she has never been seen before. In heartrending detail, we witness a struggle that unfolded at times before our own eyes, but which we failed to understand.

Leaming's biography also makes clear the pattern of Jackie's life as a whole. We see how a spirited young woman's rejection of a predictable life led her to John F. Kennedy and the White House, how she sought to reconcile the conflicts of her marriage and the role she was to play, and how the trauma of her husband's murder which left her soaked in his blood and brains led her to seek a very different kind of life from the one she'd previously sought.

A life story that has been scrutinized countless times, seen here for the first time as the serious and important story that it is. A story for our times at a moment when we as a nation need more than ever to understand the impact of trauma.

Eliza Foss has performed in numerous theaters both in New York City and around the country.  She's performed in Ten Unknown, Natural Selection, and Angels Don't Dance, among others.  She has appeared in the films Split Ends and Chutney Popcorn as well as on television in Law & Order and The Merrow Report.  She holds a M.F.A from the New York University Graduate Acting Program. Eliza has narrated over thirty audiobooks and short stories, including The Mermaid Chair by Sue Monk Kidd, The Beck Diet Solution by Judith S. Beck, and Big Love by Sarah Dunn.  She was featured in AudioFile magazine as one of “audio’s hottest romance narrators.”

“Provocative.... Recast in this light, Jackie's post-1963 actions make a new kind of sense.... With a diagnosis of PTSD in mind, incidents once criticized as selfish or at least self-indulgent can be reassessed.” —USA Today

“Jacqueline Bouvier Kennedy Onassis provides suggestive evidence that her subject suffered from the clinical symptoms of post-traumatic stress disorder, or PTSD, including flashbacks, insomnia, numbness, avoidance, fear, depression, and anger. ... Her documentation -- which includes Jackie's remarks to intimates, as well as her behavior -- is compelling. Interpreting the post-assassination life through the lens of PTSD turns out to be a fruitful way of making sense of Jackie's sometimes odd-seeming choices.” —The Boston Globe