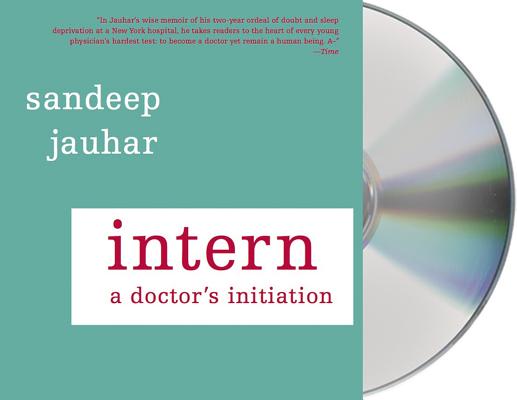 Intern is Sandeep Jauhar's story of his days and nights in residency at a busy hospital in New York City, a trial that led him to question our every assumption about medical care today. Residency—and especially the first year, called internship—is legendary for its brutality. Working eighty hours or more per week, most new doctors spend their first year asking themselves why they wanted to be doctors in the first place.

Jauhar's internship was even more harrowing than most: he switched from physics to medicine in order to follow a more humane calling—only to find that medicine put patients' concerns last. He struggled to find a place among squadrons of cocky residents and doctors. He challenged the practices of the internship in The New York Times, attracting the suspicions of the medical bureaucracy. Then, suddenly stricken, he became a patient himself—and came to see that today's high-tech, high-pressure medicine can be a humane science after all.

Now a thriving cardiologist, Jauhar has all the qualities you'd want in your own doctor: expertise, insight, a feel for the human factor, a sense of humor, and a keen awareness of the worries that we all have in common. His beautifully written memoir explains the inner workings of modern medicine with rare candor and insight.

Sandeep Jauhar, MD, PhD, is the director of the Heart Failure Program at Long Island Jewish Medical Center. He is the bestselling author of Doctored and Intern and a New York Times Contributing Opinion Writer. He lives with his wife and their son and daughter on Long Island.

Sandeep Jauhar, MD, PhD, is the director of the Heart Failure Program at Long Island Jewish Medical Center. He is the bestselling author of Doctored and Intern and a New York Times Contributing Opinion Writer. He lives with his wife and their son and daughter on Long Island.

Praise For Intern: A Doctor's Initiation…

“In Jauhar's wise memoir of his two-year ordeal of doubt and sleep deprivation at a New York hospital, he takes readers to the heart of every young physician's hardest test: to become a doctor yet remain a human being.” —Time

“Brutally frank . . . The inside look at the workings of the medical internship system is fascinating.” —William Grimes, The New York Times

“A vivid portrait of the culture of a New York City hospital, with its demanding hierarchy and sometimes indifferent cruelty.” —Vincent Lam, The New York Times Book Review

“Very few books can make you laugh and cry at the same time. This is one of them. Sandeep reveals himself in this book as he takes us on a wondrous journey through one of the most difficult years of his life. It is mandatory reading for anyone who has been even the slightest bit curious about how a doctor gets trained, and for physicians, it is a valuable record of our initiation.” —Sanjay Gupta, CNN medical correspondent and author of Chasing Life

“Intern will resonate not only with doctors, but with anyone who has struggled with the grand question: ‘what should I do with my life?' In a voice of profound honesty and intelligence, Sandeep Jauhar gives us an insider's look at the medical profession, and also a dramatic account of the psychological challenges of early adulthood.” —Akhil Sharma, author of An Obedient Father

“Told of here is a time of travail and testing--a doctor's initiation into the trials of a demanding yet hauntingly affirming profession--all conveyed by a skilled, knowing writer whose words summon memories of his two great predecessors, Dr. Anton Chekhov and Dr. William Carlos Williams: a noble lineage to which this young doctor's mind, heart, and soul entitle him to belong.” —Robert Coles

“Intern is not just a gripping tale of becoming a doctor. It's also a courageous critique, a saga of an immigrant family living (at times a little uneasily) the American dream, and even a love story. A great read and a valuable addition to the literature--and I use the word advisedly--of medical training.” —Melvin Konner, M.D. Ph.D., author of Becoming a Doctor

“In this era when medical shows abound on TV, Jauhar demonstrates the power of the written word in the hands of a sensitive, thoughtful observer and an experienced, gifted writer. Intern is a compelling, accurate and heartfelt chronicle of what that year is really like. It will be the standard by which future such memoirs will be judged.” —Abraham Verghese, author of My Own Country and The Tennis Partner

“Excellent, well-written... Jauhar captures vividly the uncertainty, fear, and extreme exhaustion that dominates the (residency) experience... As one reads this emotionally powerful story, it becomes clear that the culture in which the interns work is profoundly important to their experience.” —Katharine Treadway, The New England Journal of Medicine

“This insider's account of life on the ward forces us to contemplate our own mortality. And we emerge from it all with a greater respect for medical professionals and their patients.” —Peter McDermott, America

“An exceptional accomplishment... beautifully written and incredibly insightful... by far the best memoir of medical student or resident days yet published.” —Kenneth Ludmerer, author of Learning to Heal: The Development of American Medical Education

“Here Jauhar's skills as both storyteller and compassionate physician are at their best; his encounters illustrate the complexity of real-life clinical decision-making. ...The overall feeling that emerges is that of struggle: patients struggle against the illogical oddities of a broken health care system and less frequently they struggle against their clinicians, but most often they struggle along with their clinicians to reach an acceptable or at least meaningful compromise with the injustices that come with illness. Certainly there are no easy answers, and few writers have conveyed this truth more forcefully than Jauhar. ...Those who enjoy good writing for its own sake will savor the crafted texture of this narrative. ...Jauhar captures the essence of how it feels to be a present-day physician in residency training. ...So long as training to become a physician remains a dynamic process, memoirs like this will continue to serve an important role in exploring and explaining this process to the patients that physicians serve and, perhaps no less, to physicians themselves.” —S. Ryan Gregory, MD, The Journal of the American Medical Association

“Jauhar, like most of us, is neither a saint nor an apostle of medicine. He is a little sarcastic, a little bitter, a little naive, a little smarter, and a little stupider than everyone else; in short, the character he writes for himself is the perfect protagonist for a medical internship. As he flinches from the gauntlet run, the grace of his prose allows us to feel every blow. To this young physician, it brought back visceral feelings, and I hope this is not the last literary gut punch we receive from Jauhar.” —Noah Raizman, The Lancet Review

“Following in the path paved by doctor-writers like Lewis Thomas and Richard Selzer, Jauhar writes with grace, precision and passion. What makes him such a stimulating companion is his willingness to couple candid insights into the state of modern American medicine with equally revealing glimpses into the soul of a young doctor.” —Shelf Awareness

“Jauhar's candid account of his stressful journey is enlightening, educational and eye-opening. After ten successful years in the profession, the author dolefully admits that he is unfazed by the 'small injustices' in hospitals today. Required reading for anyone seriously considering a career in medicine.” —Kirkus Reviews

“What sets Jauhar's internship story apart from the norm is his candor.” —Booklist