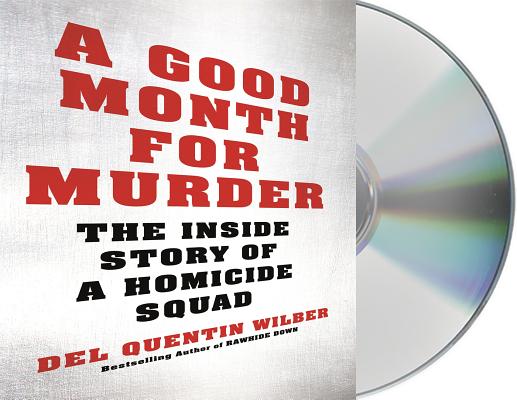 "Superb--one of the best real-life cop books ever written."—Lee Child

"With this engrossing and compelling account of the reality of crime and policing, Del Quentin Wilber affirms his place as one of the nation's most accomplished writers of first-rate narrative nonfiction. Put away your mysteries and thrillers--this is the real thing, rendered with grit and with grace."—Jon Meacham, author of American Lion and Destiny and Power

"This is the real cop story--not a TV show, not fiction, not a political diatribe. A Good Month for Murder is a deeply reported, compelling, timely account of what it's like to be a homicide detective working in the shadows of the nation's capital."—David Maraniss, author of Once in a Great City: A Detroit Story

Del Quentin Wilber is the New York Times-bestselling author of Rawhide Down, an account of the attempted assassination of Ronald Reagan. An award-winning reporter who previously worked for The Baltimore Sun and The Washington Post, he now covers the justice department for the Los Angeles Times. He lives in Chevy Chase, Maryland.

Scott Sowers has narrated numerous audiobooks, including books by Douglas Preston, Robert Ludlum, John Hart, and Nicholas Sparks. He was named the 2008 Best Voice in Mystery & Suspense by AudioFile magazine. AudioFile also awarded Sowers an Earphones Award for his narration of John Hart’s Down River, writing, “[providing] a bewitching rhythm and pace, expertly capturing and elevating this story of redemption. The combination of Hart and Sowers provides the perfect marriage of prose and voice. Together they enable the book to transcend genre fiction and become something exceptional.”

Sowers is also an accomplished actor of both stage and screen. His theater credits include roles in Inherit the Wind, A Streetcar Named Desire, Bus Stop, and A Few Good Men. His many television credits include guest roles on Law & Order, The Black Donnellys, Six Degrees, All My Children, and the Hallmark Channel’s Season for Miracles. He has also appeared in the films Trust the Man, The Village and The Ten.