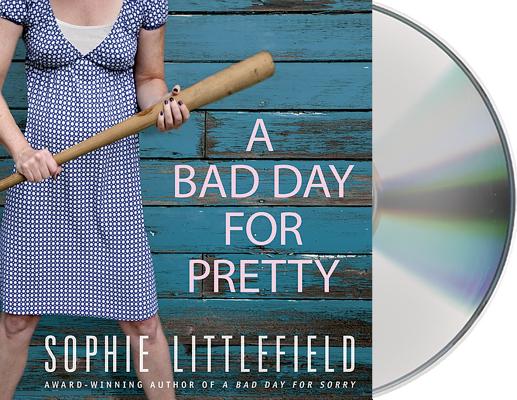 Stella Hardesty, avenger of wronged women, is getting cozy with Sheriff "Goat" Jones when a tornado blows none other than Goat's scheming ex-wife, Brandy, through the front door. Adding to the chaos, the tornado destroys the snack shack at the demolition derby track, pulling up the concrete foundation and unearthing a woman's body. The main suspect in the woman's murder is Neb Donovan---he laid the foundation, and there's some pretty hard evidence pointing to his guilt. Years ago, Neb's wife asked Stella for help getting him sober. Stella doesn't believe the gentle man could kill anyone, and she promises his frantic wife she'll look into it.

Former client Chrissy Shaw is now employed at Stella's sewing shop and she helps with the snooping as Stella negotiates the unpredictable Brandy and the dangerously magnetic sheriff.

A Bad Day for Pretty is the thrilling sequel to Sophie Littlefield's award-winning debut featuring Stella Hardesty, one of the most applauded and exciting new heroines in crime fiction today.

“No sophomore slump for Littlefield! Her second novel featuring Stella Hardesty, empowered avenger of abused women, is just as compelling and addictive as her debut....You'll race through the pages of this book and then be sorry to leave Stella and her cohorts behind.” —RT Book Reviews (4 1/2 stars)

“Sophie Littlefield's debut novel A Bad Day for Sorry garnered much buzz and every possible award nomination. A Bad Day for Pretty firmly establishes her as a new brand of writer....It's a joy when a new writer holds your attention from beginning to end. It's a treat when she has something so new to say.” —Crimespree Magazine

“Sophie Littlefield won this reader's heart with her unforgettable debut novel, A Bad Day for Sorry. The only thing I was sorry about was that it had to end. Never fear--Stella Hardesty is back to kicking ass and taking names in A Bad Day for Pretty. She's funny, profane, brave, passionate and honest in this new story of crime and punishment in rural Missouri.” —Susan Wiggs, New York Times bestselling author of The Summer Hideaway

“Who in the hell do I have to run over to get more Stella? Seriously, people, if you aren't reading about this kick-ass woman and how brilliantly Littlefield portrays her world, her heartbreaks and successes, you're missing out.” —Toni McGee Causey, author of When a Man Loves a Weapon

Sophie Littlefield is an Anthony and RT Book award winner and Edgar and Goodreads Choice finalist. Her books include A Bad Day for Sorry and A Bad Day for Pretty. She lives near San Francisco, California.
Loading...
or
Not Currently Available for Direct Purchase