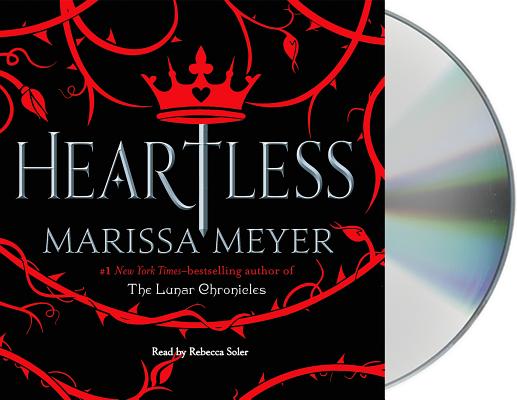 “Narrator Rebecca Soler delivers a take-no-prisoners performance for the third title in The Lunar Chronicles. Her instinctive delivery of Meyer's humor makes the story an addictive listen. Series fans and new listeners will be equally entranced.” —AudioFile Magazine on Cress

Long before she was the terror of Wonderland—the infamous Queen of Hearts—she was just a girl who wanted to fall in love.

Long before she was the terror of Wonderland, she was just a girl who wanted to fall in love. Catherine may be one of the most desired girls in Wonderland, and a favorite of the unmarried King of Hearts, but her interests lie elsewhere. A talented baker, all she wants is to open a shop with her best friend. But according to her mother, such a goal is unthinkable for the young woman who could be the next queen.

Then Cath meets Jest, the handsome and mysterious court joker. For the first time, she feels the pull of true attraction. At the risk of offending the king and infuriating her parents, she and Jest enter into an intense, secret courtship. Cath is determined to define her own destiny and fall in love on her terms. But in a land thriving with magic, madness, and monsters, fate has other plans.

In Heartless, Marissa Meyer's stand-alone novel, the New York Times-bestselling author dazzles us with a prequel to Alice's Adventures in Wonderland.

"Fans of ALICE IN WONDERLAND will love the audio version of HEARTLESS, beautifully narrated by Rebecca Soler. ...Soler does a remarkable job of bringing to life the fantasy and magic of Wonderland and drawing listeners into the adventure." -AudioFile Magazine

Rebecca Soler is a film and voiceover actress who won a 2009 AudioFile Earphones Award for her narration of After by Amy Efaw. Her audiobook credits include work by authors such as Judy Blume, James Patterson and Sarah Dessen. Soler has also narrated the popular young adult series The Lunar Chronicles by Marissa Meyer. Her voice over credits include various video games, like Star Wars: The Old Republic and Red Dead Redemption and television shows such as Pokemon, Yu-Gi-Oh, and Teenage Mutant Ninja Turtles. She lives in New York City.
Loading...
or support indie stores by buying on