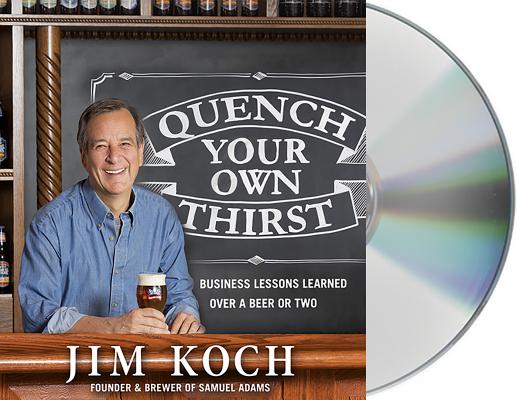 Quench Your Own Thirst

Business Lessons Learned Over a Beer or Two

Founder of The Boston Beer Company, brewer of Samuel Adams Boston Lager, and a key catalyst of the American craft beer revolution, Jim Koch offers his unique perspective when it comes to business, beer, and turning your passion into a successful company or career.

In 1984, it looked like an unwinnable David and Goliath struggle: one guy against the mammoth American beer industry. When others scoffed at Jim Koch’s plan to leave his consulting job and start a brewery that would challenge American palates, he chose a nineteenth-century family recipe and launched Samuel Adams. Now one of America’s leading craft breweries, Samuel Adams has redefined the way Americans think about beer and helped spur a craft beer revolution.

In Quench Your Own Thirst, Koch offers unprecedented insights into the whirlwind ride from scrappy start-up to thriving public company. His innovative business model and refreshingly frank stories offer counterintuitive lessons that you can apply to business and to life.

Koch covers everything from finding your own Yoda to his theory on how a piece of string can teach you the most important lesson you’ll ever learn about business. He also has surprising advice on sales, marketing, hiring, and company culture. Koch’s anecdotes, quirky musings, and bits of wisdom go far beyond brewing. A fun, engaging guide for building a career or launching a successful business based on your passions, Quench Your Own Thirst is the key to the ultimate dream: being successful while doing what you love.


Praise For Quench Your Own Thirst: Business Lessons Learned Over a Beer or Two…

"Koch takes you into his confidence with an affable, gravelly voice, detailing lessons learned; frank stories of mistakes and failures; and thoughts on how a focus on quality, community, and innovation have propelled his work. You don’t have to be a hophead to glean insights, as Koch’s down-to-earth language, deadpan humor, and clear passion for beer help pull listeners in (his loving description of tasting the company’s signature Sam
Adams Boston Lager charmingly borders on the erotic). With short chapters and amusing anecdotes, this is
an enjoyable listen for budding entrepreneurs, craft-brew drinkers, and anyone who enjoys learning the ins and outs of a unique industry." -Booklist

Jim Koch is the founder of The Boston Beer Company and brewer of Samuel Adams. He founded the company in 1984 using his great-great-grandfather’s recipe and set to the task of revolutionizing American beer. Samuel Adams Boston Lager has been an important catalyst in the American craft beer revolution for more than thirty years, bringing full-flavored, award-winning beer to the American beer landscape. The Boston Beer Company has become one of the leading American craft breweries and now accounts for just over 1 percent of the U.S. beer market. Jim and his family reside in Newton, Massachusetts, home of the Fig Newton.
Loading...
or
Not Currently Available for Direct Purchase