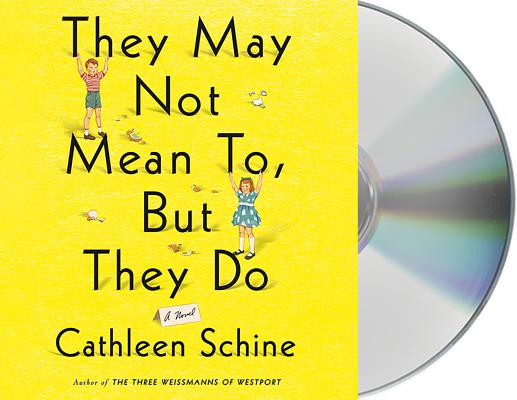 They May Not Mean To, But They Do

Joy Bergman is not slipping into old age with the quiet grace her children, Molly and Daniel, would prefer. She won't take their advice, and she won't take an antidepressant. Her marriage to their father, Aaron, has lasted through health and dementia, as well as some phenomenally lousy business decisions. The Bergman clan has always stuck together, growing as it incorporated in-laws, ex-in-laws, and same-sex spouses. But families don't just grow, they grow old. Cathleen Schine's They May Not Mean To, but They Do is a tender, sometimes hilarious intergenerational story about searching for where you belong as your family changes with age.

When Aaron dies, Molly and Daniel have no shortage of solutions for their mother's loneliness and despair, but there is one challenge they did not count on: the reappearance of an ardent suitor from Joy's college days. They didn't count on Joy suddenly becoming as willful and rebellious as their own kids.

With sympathy, humor, and truth, Schine explores the intrusion of old age into a large and loving family. They May Not Mean To, but They Do is a radiantly compassionate look at three generations, all coming of age together.

Cynthia Darlow has been recording audiobooks since 2000, and has received several Earphones awards from AudioFile Magazine for her work. Darlow narrated Macmillan Audio’s The Red Hat Club and Ladies of the Lake, both by Haywood Smith.  In describing Darlow’s reading of Ladies of the Lake, Booklist stated, “Darlow jumps into the novel's spirit, pulling out characters with voices dripping with southern charm. Her smooth-as-honey, well-paced reading makes Smith's zany scenes shine."

She has made numerous stage appearances both on and off Broadway and in regional and repertory theater. Most notably, she appeared in the original Broadway production of Grease and The Thomas Crown Affair with Pierce Brosnan. Her television credits include all versions of Law & Order and The Sopranos.