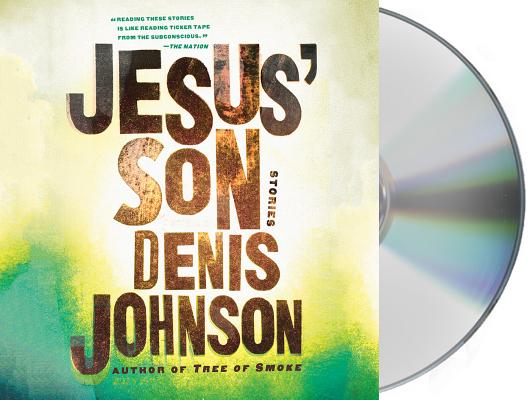 Denis Johnson, Will Patton (Read by)

Denis Johnson's now classic story collection Jesus' Son chronicles a wild netherworld of addicts and lost souls, a violent and disordered landscape that encompasses every extreme of American culture. These are stories of transcendence and spiraling grief, of hallucinations and glories, of getting lost and found and lost again. The insights and careening energy in Jesus' Son have earned the book a place of its own among the classics of twentieth-century American literature.

“Patton's narration is pitch perfect; he produces voices for a collection of gritty, bent souls who spend their lost days riding buses, hitchhiking, breaking into abandoned houses, drinking at the Vine, and stealing pills from the hospital dispensary. An absolute must for Johnson fans and a fine introduction to the author's work.” —Publishers Weekly

“Appropriately, Patton's reading is anything but warm and welcoming, but his delivery is so inescapably present that it draws listeners into the work and compels them to drop any preconceived notions about the protagonist and his life. The result is a memorable journey.” —AudioFile, Earphones Award Winner

“Will Patton keeps matters interesting with his gruff yet puzzled narration, making his clueless characters just "with it" enough to stay sharp and real.” —Winston-Salem Journal

“Will Patton is the growly voice of your audiobook dreams. His voice sounds like it's wearing a beat up leather jacket and worn out jeans, which is perfect for Denis Johnson's stories of drug adventures and smoky dive bars. Characters with a wild past deserve the kind of voice that may have made some questionable and risky decisions.” —BuzzFeed

Will Patton is an Earphones Award-winner and Audie finalist who has narrated works by Charles Frazier, Larry McMurtry, Don DeLillo, and Ernest Hemingway.  He was named Best Voice in Mystery & Suspense by AudioFile magazine in both 2008 and 2009. Patton’s narration of Stephen  King’s Doctor Sleep earned an Audie for fiction in 2014.

Patton has also won two OBIE awards for best actor for the off-Broadway plays, Sam Shepard's Fool for Love and the Public Theatre production of What Did He See?  He's appeared in a host of films including A Mighty Heart with Angelina Jolie, Knucklehead, Brooklyn's Finest, and Dog Days of Summer.  His many television credits include The Agency, CSI: Crime Scene Investigation, 24, and Numb3rs.