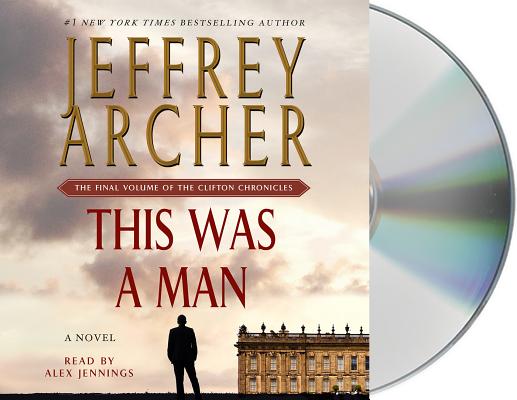 This Was a Man (CD-Audio)

This Was a Man opens with a shot being fired, but who pulled the trigger, and who lives and who dies?
In Whitehall, Giles Barrington discovers the truth about his wife Karin from the Cabinet Secretary. Is she a spy or a pawn in a larger game?

Harry Clifton sets out to write his magnum opus, while his wife Emma completes her ten years as Chairman of the Bristol Royal Infirmary, and receives an unexpected call from Margaret Thatcher offering her a job.

Sebastian Clifton becomes chairman of Farthings Kaufman bank, but only after Hakim Bishara has to resign for personal reasons. Sebastian and Samantha’s talented daughter, Jessica, is expelled from the Slade School of Fine Art, but her aunt Grace comes to her rescue.

Meanwhile, Lady Virginia is about to flee the country to avoid her creditors when the Duchess of Hertford dies, and she sees another opportunity to clear her debts and finally trump the Cliftons and Barringtons.

In a devastating twist, tragedy engulfs the Clifton family when one of them receives a shocking diagnosis that will throw all their lives into turmoil.

This Was a Man is the captivating final installment of the Clifton Chronicles, a seven-part series that has topped the bestseller lists around the world, and enhanced Jeffrey Archer’s reputation as a master storyteller.

Long time series narrator Alex Jennings returns for Archer's final installment of the Clifton Chronicles. On Be Careful What You Wish For, AudioFile says, "Alex Jennings's skillful narration deftly unveils the large cast of characters as they maneuver through the nonstop action...Jennings connects with each character for a satisfying, enjoyable listen."

"The series is wonderfully narrated by the English actor Alex Jennings whose voice is a perfect match for Clifton’s world." Boston Globe